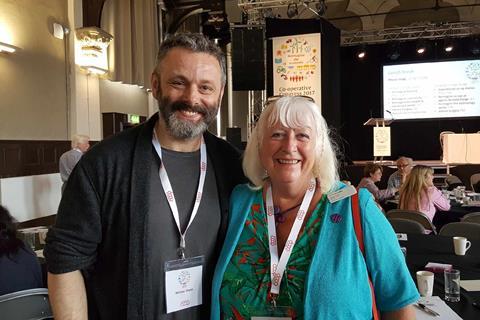 Hollywood actor Michael Sheen has backed Central England Co-op’s campaign in a bid to help children who are at risk of hunger this summer.

The Welsh actor, who is known for his roles in the Twilight Saga, The Queen and Good Omens, urged people to donate food to the Summer Support for Kids campaign.

The retailer has been running the food bank campaign since the start of July.

It comes on the back of research by its food distribution partner, FareShare Midlands, that shows across the counties it trades, 1.2 million children are currently living in poverty.

The campaign sees customers drop off food items at their local store. These are then collected by local food banks and turned into meals for children who would normally be enjoying free school meals.

“Please back this worthwhile campaign by Central England Co-op and help our co-operative community make a difference this summer and beyond,” said Sheen.

The appeal is running until September, during which time items such as tea, sugar, cereals, toiletries, hygiene products and sun cream can be donated.

For the first time this year, other items needed include small arts and crafts supplies such as crayons and paints, as well as pencil cases and stationery.

So far, the campaign has seen Central England Co-op donate £100,000 to FareShare Midlands, which will pay for more than 365,000 meals to children in need this summer.

It will also be lobbying for a change in government policy to provide better support on the matter.

Society president Elaine Dean praised the acting star for his support towards the campaign.

“I’m delighted that such a prestigious actor as Michael Sheen is backing our Summer Support for Kids campaign,” she said.

“I was honoured to meet him at Co-op Congress in 2017 where he was a delegate from South Wales. He is a true co-operator who has never forgotten his working class roots despite the accolades which have come his way after playing iconic figures like Brian Clough and Tony Blair.”