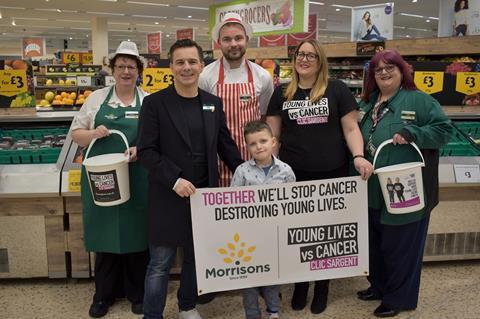 Morrisons has extended its fundraising partnership with CLIC Sargent, the charity for young people with cancer, for a fourth year.

The supermarket has been partnered with the charity since February 2017 and has raised £11m during that time.

Originally a three-year partnership with a target of £8m, the figure was increased to £10m as a result of the success of fundraising in the first year.

In February 2019, following a colleague vote, the partnership was extended to include a fourth year.

The partnership with CLIC Sargent is now aiming to raise £15m by February 2021.

Money raised during this additional year will go towards the opening of a new CLIC Sargent ‘Home from Home’ in Manchester - a place for families to stay while their child is receiving cancer treatment nearby.

Morrisons commercial director Andy Atkinson said: “We love having CLIC Sargent as our charity partner. The cause and the support CLIC Sargent gives to young people and families has really resonated with Morrisons colleagues and customers.

“We’re delighted at how much money we’ve been able to raise so far - and the impact that it is having. This fourth year is an exciting one for us as we aim to reach our £15m target and open the Manchester ‘Home from Home’ - a lasting legacy to our record-breaking partnership with CLIC Sargent.”

The link-up was named ‘Best Partnership with a Children’s Health Charity’ at the Better Society Awards in May last year.

During the third year of the partnership, more than 130 Morrisons colleagues took part in a special Mount Snowdon trek, raising £56,000.

Rachel Kirby-Rider, director of income and engagement at CLIC Sargent, added: “Morrisons are incredible and we are so grateful to have their support as a charity partner.

“We’re in awe of what they have raised for CLIC Sargent in the past three years and we are so excited to be working with them for a fourth year as we work towards opening a brand new ‘Home from Home’ in Manchester. Their support has helped thousands of families affected by cancer and we can’t thank them enough for their ongoing support.”