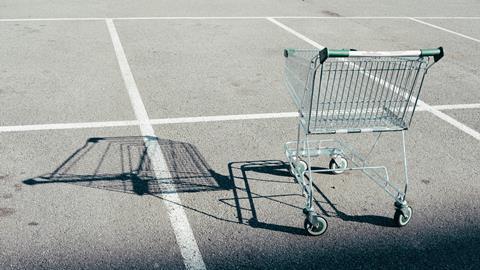 What is happening to UK supermarket sales during the coronavirus crisis?

Coronavirus has sparked a wave of unprecedented demand in UK supermarkets over the past month, as the government imposed increasingly strict social distancing measures. So how exactly have consumer habits have changed throughout the crisis? We’ve analysed the latest sales data to find out.

When did Brits begin stockpiling?

The UK confirmed its first cases of Covid-19 at the end of January and by early March, cases had been found in England, Wales, Northern Ireland and Scotland.

On 12 March the UK’s risk level was raised from moderate to high and four days later, the government announced social distancing measures, urging Brits to avoid pubs, clubs and theatres and work from home if possible.

On 18 March, the UK announced schools would close for most pupils and two days later PM Boris Johnson ordered the closure of all restaurants, pubs, clubs and indoor sport and leisure facilities. On 23 March, the UK government imposed nationwide lockdown, ordering Brits to mostly stay at home.

Supermarkets remain open and Brits are still allowed to leave their house to shop for essentials. But the introduction of restrictions, combined with fears over the possibility of self-isolation, prompted a wave of ‘panic buying’ that intensified throughout March, IRI data shows.

Sales peaked in the week ending 21 March 2020, when they hit £3.1bn on volumes up 40% in “one of the biggest weeks the grocery market has ever seen”, says IRI commercial director Tim Dummer

That’s £1bn more than during the same week last year and almost equivalent to weekly spend in the run up to last Christmas - when sales hit £3.2bn (IRI: w/e 21 December 2019).

Since then, however, sales have plummeted again. Last week, they reached just £2.1bn. That’s lower than the £2.4bn spent in the same week last year.

“This week with social distancing restrictions, already full cupboards and consumers starting to get into a routine of shopping less and buying more we have seen a big drop off with volumes down ten percent on the previous peak,” says Dummer.

Still, over the past four weeks, Brits spent a total of £10.2bn, IRI data shows, which is a whopping £1.3bn more than in March last year.

How are buying habits changing?

Nielsen data shows a similar acceleration of sales throughout March, with the highest weekly growth of 43.1% coming in the w/e 21 March 2020. In total, Brits splashed out £1.9bn extra in the four weeks to 21 March 2020, it found.

That was driven by people shopping more often, as well as buying more on each trip, Nielsen suggests.

In the four weeks to 21 March 2020, Brits typically added just one extra item to their basket during each shopping trip – with the average basket increasing from 10 to 11 items, it found.

However, they made on average three additional shopping trips during this period, equating to 79m more shopping trips compared to the same period year.

What have people been buying?

Frozen foods also got a boost towards the end of March. According to Nielsen, spend on frozen food rose 84% in the week ending 21 March 2020 vs the same period a year ago.

“The BWS performance last week was quite frankly staggering with shoppers reacting to the close down of pubs and clubs,” says IRI’s commercial director, Tim Dummer. “This reflects the wider shifting behaviour of UK shoppers who are moving from panic buying core categories into bulk purchasing more indulgent ones.”

Numerous other grocery categories also enjoyed double-digit growth, with most showing some growth. However, there have been some losers. Sales of chilled salads (-2.1%), instore bakery (-6.5%) and loose fresh fish (-27.8%) have suffered after supermarkets closed cafes and counters, while sales of cosmetics & fragrances (-15.9%) and suncare (30.4%) have taken a dive as Brits stayed home and cancelled holidays.

Which retailers have benefitted most?

All UK supermarkets experienced “significant growth in sales” over the four-week period to 21 March 2020, according to Nielsen. But Iceland saw the biggest sales growth over the period, followed by Waitrose.

“As well as increased store visits, consumers opted to shop online - many for the first time,” said Mike Watkins, Nielsen’s UK head of retailer and business insight. “However, unlike stores there is a finite capacity for online grocery shopping, due to warehouse capacity and available delivery slots, and this will have limited the growth of online sales.”