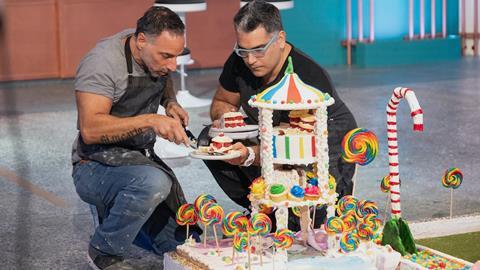 Is The Great British Bake Off too cheerfully comradely for you? Telly addicts with a taste for higher-stakes bakes should give Netflix’s new Baking Impossible (available now) a try.

Hosted by US magician-comedian Justin Willman (he employs neither skill), it sees the worlds of baking and engineering collide, with nine teams battling to win $100,000 and the chance to be acknowledged as “the world’s best bakineers” (as with baseball, ‘the world’ means ‘the US’, and no one else plays anyway).

Episode one sees the bakers and engineers awkwardly introduced in an expensive-looking studio, before being assigned their first ‘mission’ – to build a two ft long cakey ‘sailboat’ with a working rudder, which must face the show’s ‘sea of doom’, under seven knots of wind. Now that’s a soggy bottom worth worrying about.

It’s a ridiculous, pointless and wasteful concept: but it’s also spectacular, and it’s fascinating to see the competitors working together, schooling each other in their respective disciplines and fixing problems on the fly. Rodolfo and Sara’s pirate ship, for example, ingeniously employs a sausage casing ‘sea monster’ as a buoyancy aid, while Cindy and Taylor make smart use of unleavened ‘dead dough’.

The taste element seems humdrum compared with the sailing challenge – but the judging panel, led by Andrew Smyth, the baker-cum-engineer from GBBO series seven, offers constructive insight into function and flavour.

The series promises future forays into robotics, sports and even fashion – as well as strained inter-team relationships. We’re hooked.