Shoppers turn to online this Christmas as the high street struggles 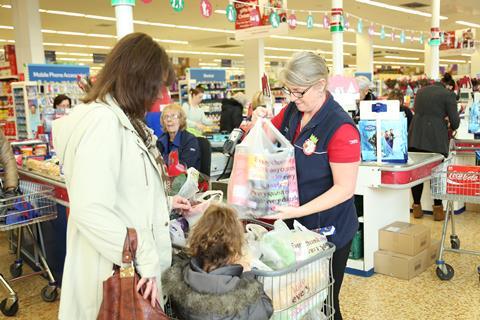 UK retail sales rose just 0.1% in the run up to Christmas as the appeal of shopping online grew, data for the period has revealed.

The challenging conditions on the high street in December, with total growth of 1% to go with the like-for-like rise of 0.1%, were confirmed by the latest sales monitor from British Retail Consortium-KPMG this morning.

Supermarket food sales didn’t help matters, with figures down 1.1% year on year between October and December – and up just 0.2% when new space was included. The three-month average for non-food was slightly better, climbing 0.6% like for like and 1.5% in total, but it was still the weakest growth recorded since January 2013.

However, KPMG head of retail David McCorquodale said the grocers, in the face of persistent price deflation, had a “fairly admirable Christmas”, with total food and drink sales back in the black for the first time since September.

IGD CEO Joanne Denney-Finch added: “Shoppers took Christmas food and drink spending even closer to the wire, but despite lower prices eventually came through to deliver a small annual increase. People have become experts at hunting down value, benefiting from more ways to shop in-store and online, but will treat themselves when offered the right combination of convenience, price and quality.”

The data coincides with the mixed Christmas reported by retailers so far, with Marks & Spencer CEO Marc Bolland stepping down amid a near 6% fall in clothing sales and Poundland shares slumping as it said profits would be at the low end of expectations. Morrisons this morning beat analyst forecasts by reporting a small 0.2% rise in like-for-like sales as it trimmed back its estate, with results still to come this week from Sainsbury’s and Tesco.

Shoppers stayed away from the high street in increasing numbers, with online sales for non-food climbing 15.1% in December.

BRC CEO Helen Dickinson said: “2015 drew to a disappointing close for retailers, with December seeing just 1% sales growth, notwithstanding the strong underlying momentum of an improving consumer environment buoyed by rising real incomes, low inflation and low unemployment. Online performed strongly as consumers embraced the convenience and flexibility that more sophisticated retailers offered. Nevertheless, the boost from online was not enough to make this a Christmas to remember for most retailers.”