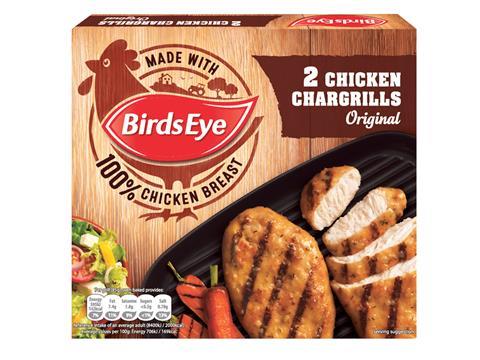 Birds Eye’s frozen chicken range is back in sales growth for the first time in three years, following a £7.1m investment in the lineup earlier this year.

Value sales of the range have grown by 0.5% over the past six months compared with sales in the same period last year [Nielsen 26 w/e 15 July 2016].

It comes as Birds Eye has invested a further £2m in its frozen chicken range until the end of the year, featuring TV, print and digital advertising from 21 August. This “phase two” - as Birds Eye calls it - will focus on communicating that the brand’s chicken has been Mumsnet Rated after being sampled by a panel of Mumsnet testers.

Birds Eye unveiled “phase one” in February with the relaunch of its entire frozen chicken range as part of a £7.1m investment to reassure consumers of the quality of its frozen chicken.

The investment included TV, outdoor and digital activity, alongside new packaging with an emphasis on its use of 100% chicken breast and information on the range’s provenance as barn-reared chickens.

The multimillion-pound push marked Birds Eye’s biggest-ever investment in frozen chicken, a category it described as being “unloved for years”.

“From the outset of this campaign, the main objective was to reassure parents across the UK about Birds Eye chicken’s quality and taste credentials, and to challenge common misconceptions about frozen chicken,” said Andrew Elder, general marketing manager at Birds Eye. “And clearly we’ve been doing it, with solid results to show so far.

“We’re now back in growth for the first time in three years, and thrilled to have been awarded the Mumsnet Rated badge with such glowing feedback from mums across the UK.”