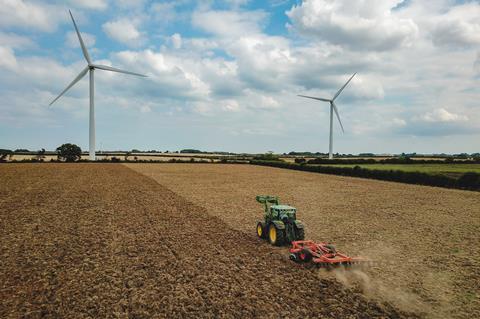 Kiss the Ground on Netflix, narrated by actor Woody Harrelson, argues compellingly that soil and regenerative agriculture are the keys to reversing climate change. With so much of the world’s topsoil eroded, the apocalyptic message in this documentary is that the world has only 60 harvests left. However, there is also a hopeful tone that the curve can be bent if we act now.

Agriculture is unique in that it has the ability not just to diminish carbon emissions, but to reverse them. In all the noise around climate change, the importance of photosynthesis and the power of carbon capture from plants have often been forgotten.

The good news is that there are innovative companies, such as Indigo AG and Mineral X, which are challenging the consensus and looking to fundamentally change the agricultural model. On Mineral X’s website, it highlights that the world will need to produce more food in the next 50 years than in the previous 10,000 years, at a time when climate change is making crops less productive, and when only 1% of the 30,000 edible plants species are cultivated for human food.

Indigo AG believes carbon can be the new agricultural cash crop – as long as the carbon yield can be accurately measured and verified. Whilst carbon credits are not a new concept, measurement has always been an issue, but new technology is changing this. Farmers with carbon credits can sell their credits to governments or organisations with carbon deficits.

Indigo’s vision is that every farm will have a carbon mass balance where carbon sequestration can be tracked real-time with a variety of increasingly sophisticated tools and data analytics. This could be a game-changer for the speed of regenerative agriculture adoption, with farmers being paid for a useful societal service. A virtuous circle could be created, driving a faster adoption curve and fuelling a wave of disruptive thinking to drive new technologies, all aimed at developing the lowest-cost and most effective ways to measure and monetise carbon yields.

Whilst this may sound high-tech, the basic concepts of regenerative agriculture have been around for centuries and at heart are low-tech. It centres around the planting of cover crops that capture carbon dioxide, greater diversification of crops and no-till farming. Ploughing fields emits massive amounts of carbon dioxide, whereas no-till farming actually sequesters carbon dioxide in the soil.

Switching to regenerative farming could sequester a couple of tonnes of carbon per acre per year, which, if scaled across agriculture, has the power to reverse global warming.

One of the myths is that regenerative farming requires an economic trade-off. Regenerative farmers are already more profitable due to decreased input costs and have better margins. If, on top of this good starting point, these farmers are able to monetise carbon, it has the potential to double profitability.

One thing is for sure: the farm of the future will be very different from today, with technology better informing farmer decisions. Sensors, artificial intelligence and more automation will be commonplace. The ability to measure carbon in the soil will improve significantly, which will potentially open up a new revenue stream for regenerative farmers, but also help in the fight to deliver on the Paris 2050 climate accord to keep temperature rises below 1.5 degrees. Given so much of their Scope 3 emissions come from agriculture, food companies have a crucial role to play in providing their farmers with the right incentives.