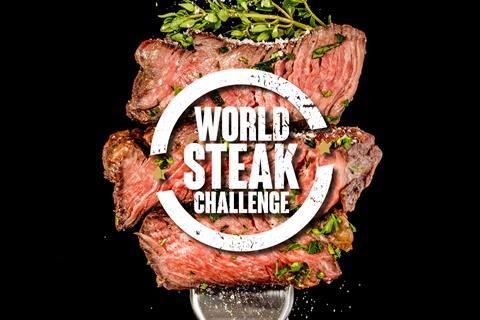 The prestigious awards have returned, having been suspended last year due to Covid-19

Run by The Grocer’s publisher William Reed, the event – now in its seventh year – is set to put the world’s finest cuts to the test. It gives producers and suppliers the chance to showcase the quality and flavour of their produce, breed credentials and processing standards.

Beef and steak producers, wholesalers and retailers have until Monday 20 September to enter this year’s edition of WSC, with judging set to take place in the Fire Steakhouse in Dublin in early November. Winners will be announced on the official awards website from 9 to 11 November.

Categories include World’s Best Sirloin, World’s Best Rib-Eye, World’s Best Fillet, Best Grain-fed and Best Grass-fed, alongside the overall World’s Best Steak title. All entries will be assessed by a panel of more than 50 independent judges and the best performing are awarded gold, silver or bronze medals.

“We’re thrilled to bring back this year’s World Steak Challenge and are looking forward to welcoming even more entries from all over the world,” said Lorraine Hendle, MD of retail and manufacturing at William Reed.

“The WSC is the ultimate competition for steak producers and suppliers. Winning the challenge not only independently proves the quality of a product but helps steak producers promote and publicise the credentials of their brand, while also testing their products against an international field.”

The 2020 edition of the awards was suspended due to the Covid-19 pandemic.

However, the previous year saw more than 300 sirloin, fillet and rib-eye steaks entered from 26 countries.

At that 2019 event, Danish business JN Meat International won the title for the best steak in the world with a rib-eye from a grass-fed Ayrshire reared in Finland.

Those wishing to emulate JN Meat International can enter via the WSC website.