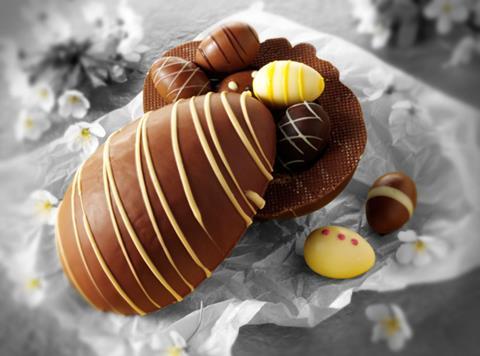 Shoppers treated themselves as lockdown restriction began to ease in the run up to Easter, spending £439m on chocolate and sweets over the last month, according to the latest data from NielsenIQ.

It represented a 34% increase in confectionery sales in the four weeks ended 27 March 2021 compared with a year ago as the UK was left reeling by the coronavirus outbreak and the first full national lockdown.

With non-essential shops remaining closed during the period, consumers turned to supermarkets for non-food products as they planned for the spring and the end of the latest lockdown, with clothing sales more than doubling to £313m, home sales up 61% versus last year and garden up 92%.

In contrast, sales of packaged grocery fell by -24% and household goods, such as cleaning and paper products, fell by -31% compared to last year as figures began to lap the period of panic buying during the early days of the pandemic.

Overall grocery spending at the tills fell by -2.9% in March as a result of the tough comparators.

However, when compared with the same period in 2019, the till roll of March 2021 amounted to a 14% growth in sales as British shoppers spent £1bn more on groceries in the past four weeks than they did two years ago before the pandemic struck.

NielsenIQ data also revealed that in the past four weeks, online grocery sales remained high, growing at 92%, while bricks and mortar sales declined by -14% year on year.

While overall growth declined in the past four weeks, the picture for the first quarter of the year indicated that sales were now levelling off, NielsenIQ said, with industry growth of +5.7%, down from +8.6% in the final quarter of 2020.

Mike Watkins, NielsenIQ UK head of retailer and business insight, said: “It’s clear that as we draw ever closer to the end of lockdown, consumers have been looking ahead to spring and indulging in some retail therapy, ranging from Easter chocolate to some new clothing or accessories for the home and garden.

“With the economy slowly reopening we will soon see a rebalancing of consumer spend in the months ahead. As 80% of consumers say they would feel confident returning to restaurants once they’ve had their vaccine, many billions of pounds are set to return to cafes, pubs and restaurants which could impact on grocery sales. But, with the likelihood of a ‘stay-at-home summer’, supermarkets are still well-positioned to capture incremental spend.”

Watkins added: “However, one in three (35%) British consumers are now newly constrained, having faced a decline in household income or financial situation and are now watching what they spend much more — up from 29% in September. These multiple factors mean that it is still unclear how all consumers will respond post-lockdown, and how exactly their shopping habits towards food and drink with change still remains to be seen.”

A shift to home cooking during the pandemic has helped mixed protein producer Hilton Food Group increase revenues by 53% to £2.8bn in 2020.

The group, which supplies retailers across the world, including Tesco in the UK, said good progress was made in Europe across all its red meat, fish, vegetarian/vegan and fresh food categories, benefitting from consumers eating out less as a result of Covid restrictions.

Hilton’s continued expansion across the globe also contributed to the strong set of results.

Volumes in the 53 weeks to 3 January jumped 24% on the back of strong growth in Australia, with business more than doubling thanks a full year of production in its new state-of-the-art facility in Brisbane and the end of a transition period for a joint venture, with Hilton taking ownnership of the assets.

Europe saw volume growth of 8.5% and Hilton said the performance in the UK was positive.

Adjusted operating profits for the year rose 20% to £67m.

Chariman Robert Watson said he was proud of the commitment and resilience shown by the Hilton team during the 2020 pandemic.

“This response underpinned a strong performance with both volume and profit growth and we concluded our joint venture transition period in Australia and purchase of the related joint venture assets while marking our one year anniversary of the opening of our Queensland facility,” he added.

“In Europe we set up a new facility in Belgium during the year to supply Delhaize and continued to further diversify our product offering in the plant-based, seafood and convenience categories. As with all businesses there remain some uncertainties concerning the full impact of Covid-19, including potential recessionary risks, but our robust and sustainable business model and wide geographical spread make us believe we are well placed to meet any future challenges.”

Deliveroo is among the early risers, with the stock climbing 3.6% in the early going to 290p. Other risers include Nichols, Bakkabvor and Glanbia.

Travel concession operator SSP Group has collapsed 15.4% to 331.8p sp far as investors continnue to worry about the speed of reopening and how soon travel can return.

McColl’s, Wynnstay and The Hut Group are also among the early fallers.

Newly listed meal kit group Parsley Box had a good day to climb 4% to almost get back to its float price of 200p. However, sentiment has still not swung behind Deliveroo, which fell another 0.7% to 280p.