The market was intoxicated by the heady prospect of a global brewing mega-deal this week, sending drinks shares rocketing. Heineken’s announcement on Monday that it had firmly rebuffed an advance from SABMiller was seen as the clearest sign yet that a wave of consolidation across the brewing sector could be upon us.

Rumours that AB InBev could be eyeing up London-listed SAB Miller first surfaced as long as four years ago, but SAB’s attempted wooing of Heineken - interpreted by many as a defensive ploy to ward off AB InBev’s advances - suggests we are closer to the end game. SABMiller’s shares shot up by over 10% on Monday to 3,752p, with Canaccord Genuity analysts noting: “That SABMiller’s inorganic options have been so publicly lessened puts AB InBev in an even stronger position… SABMiller shareholders may be even more likely now to welcome a bid.”

AB InBev, Heineken and Carlsberg were all trading up early this week, as was Diageo - which rose 2.2% on Monday after being tipped as a possible alternative target for SABMiller as it attempts to avoid being swallowed by its bigger rival.

However, the brewers’ shares settled down through the week as reality hit that a deal was still a long way away. SAB Miller’s shares eased to 3,524p by Thursday lunchtime, still about 2.5% up from closing price last Friday.

AB InBev has reportedly opened talks with banks about financing the £75bn deal, but Investec analysts noted: “It is a formidable challenge to make the numbers work.”

Elsewhere, a host of brokers upgraded their expectations for Greggs after the bakery chain announced a larger than expected 5.4% jump in sales for the 11 weeks to 13 September.

Consensus forecasts on full-year profit were for a 44% rise to £47.6m, but house broker UBS raised its forecast to £54.1m after the announcement. Shore Capital upgraded the shares from ‘hold’ to ‘buy.’ The shares jumped 12.3% to 602p on Monday - their highest price for five years - before settling back to 595p on Wednesday. 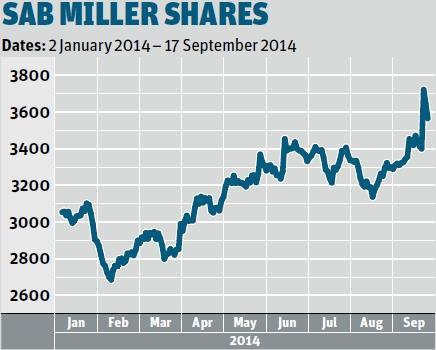