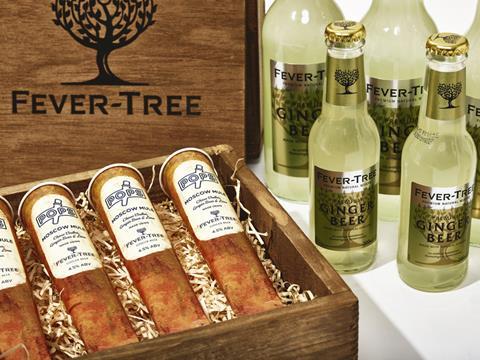 Posh tonic maker Fever-Tree hits £2bn after meteoric three year rise – but are shares about to peak, asks The Daily Mail? Chairman Bill Ronald said he expects results for this coming year to be ‘comfortably’ ahead of market expectations. Shares in the AIM-listed firm fizzed to 1761p in early trading – valuing it at more than £2billion for the first time – but by the close it was down 2.6% amid concerns it may be past its peak. Analysts at Whitman Howard said: ‘Mixers rely on distilled spirits for their volume, and in the case of Fever-Tree, western-style spirits volumes. These spirits volumes are broadly static.’ (The Daily Mail)

Is it possible that you can have too much of a good thing? Fevertree Drinks made it eight profit upgrades in a row yesterday as it predicted that its full-year results would be comfortably ahead of market expectations, yet its shares failed to enjoy the usual bounce. One analyst suggested that the mixers group might be the victim of “good news fatigue”. (The Times £)

Booths, the upmarket Northern grocery chain, has parted ways with its first and only ‘outsider’ chief executive in a move that returns the leadership of the retailer to family hands. Chris Dee, who had been with Booths for the past 22 years, became chief executive of the 168-year-old business in 2015, becoming the first non-family member to run the business. (The Telegraph)

Britons routinely bin 1.4m edible bananas every day at a cost of £80m a year, figures reveal. A third of consumers (30%) admit to discarding a banana if it has even a minor bruise or black mark on the skin. More than one in 10 (13%) also throw the fruit away if it shows any green on the skin (The Guardian). UK supermarkets are making more space for increasing amounts of less-than-perfect produce. Sainsbury has started a campaign to encourage use of blemished bananas, while Morrisons has a new “wonky” range that includes avocados for 39p. (The BBC)

Unilever will buy the personal-care and home-care brands of Quala, the Colombian consumer-goods company dubbed a “local dynamo” by Boston Consulting Group. Three months after Kraft Heinz’s aborted $143bn bid for the Anglo-Dutch group, Unilever said it would use bolt-on acquisitions to help grow revenues. (The Financial Times £)

Virgin Money has walked away from a potential takeover of the Co-op Bank as the struggling lender prioritises talks with a group of hedge funds about a financial restructuring. (Sky News)

The Times (£) looks at the 20th anniversary of Amazon’s US float noting that yesterday the company was valued at $465 billion and found Jeff Bezos was worth about $82bn. A pound investment in Amazon on the day it floated would have been worth £490 yesterday.

Bernstein analysis pours some cold water on the virtues of premium aqua brands after running its own taste test. In terms of the ability to correctly identify beverages as premium or not, respondents on average got half right and half wrong (i.e., 47%). Respondents who claimed taste was a factor driving their preference in water actually scored worse in their ability to identify premium (correct only 44% of the time, compared to the rest of respondents at 49%). (The Financial Times £)

Singapore, one of the most urbanised nations on earth, is making land available for agriculture for the first time in decades for farmers to come up with high-tech ways of improving the city-state’s food security. (The Financial Times £)