Sainsbury's bumps up prices for 150 beers and ciders 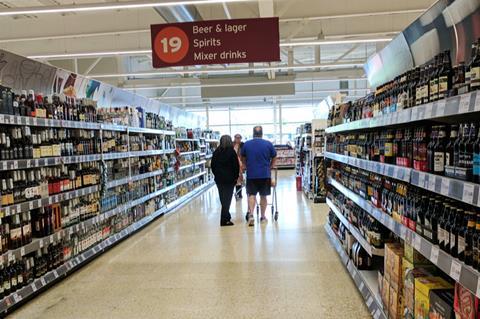 Sainsbury’s has ramped up the price of almost 150 beers and ciders.

The supermarket has upped the cost of a swathe of larger-format bottled SKUs from some of Britain’s biggest beer and cider brands, including Estrella Damm, Budweiser, Stella Artois, Coors Light and Magners, as well as a host of canned multipacks, exclusive research by The Grocer reveals [Edge by Ascential 52 w/e 15 February 2019].

The majority of larger single-serve bottles have had 10p added to their price, such as Pravha 660ml and Heineken 650ml bottles, which have both risen from £1.85 to £1.95, while smaller 500ml bottles have risen as a rule by 5p. The likes of Guinness Golden Ale, Fuller’s London Pride and Greene King’s Old Speckled Hen have all risen from £1.80 to £1.85, for example.

Canned multipacks also saw prices rise, but largely to a lesser degree. A 4x440ml pack of Foster’s rose by 40p to £4, while the same size pack of Guinness Original Stout rose 25p to £5.25.

A spokesman for the supermarket stressed prices “can fluctuate, both up and down” thanks to “a number of factors” but insisted Sainsbury’s was “committed to providing our customers with great quality and value”.

It was likely Sainsbury’s had faced cost increases from suppliers and chosen to pass them on, suggested beer consultant William Simmons. “This is the normal time to pass them on - and will include ingredients, bottles, shrink wrap, cards and labels.”

Indeed, brewing industry sources last year warned of a “huge escalation” in brewers’ cost base for 2019 due to lacklustre barley production across Europe. Speaking to The Grocer at the time, one high-ranking figure called it “the single largest challenge for beer” and suggested costs could “almost double” in some instances.

However, another senior source said: “I think what you’re observing is a business that is chasing the bottom line in acceptance of the fact that the top line is never going to grow. If you’re sat there as a retailer - almost regardless of category - you’re not growing volume.

“You either trade it really hard and hope it drives footfall, which hasn’t worked in the past, or you say actually we’re going to attract our core consumer, our core Sainsbury’s shopper is pretty intact and we’re going to hope that our range, our availability and all that goes with it means we actually start to make some money out of these items.”

Sainsbury’s share of the beer market has been largely flat over past years, increasing nominally from 13.5% to 13.6% over the 52 weeks ending 30 December 2018, while the likes of Tesco, Aldi and Lidl made much more significant gains [Kantar Worldpanel].

The source added: “Perhaps they have discovered that this particular shopper is transient and they’re never going to win them. If they’re competing with Asda or Morrisons then they can’t compete on price, so they’re saying ‘we can’t fight and we don’t promote so let’s just make some margin’.”

Beer isn’t the only BWS category growing more expensive this year. Last week The Grocer revealed that the big four had all raised their wine prices as recent duty hikes took hold.