Savings creep up as mults focus on half-price offers 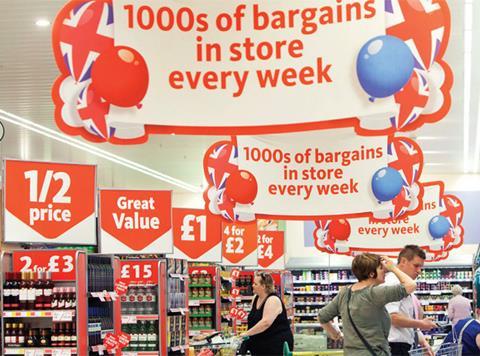 The overall number of promotions on featured space once again declined in the four weeks to 7 May 2017, but shoppers finally saw savings start to creep up once more.

Assosia director Kay Staniland says this is largely the result of a 21% increase in the number of half-price offers run by the mults. “Average price cut deals offer around 30% savings on base price, so increasing half-price deals immediately shows a bigger commitment to keeping the basket spend lower,” she says.

The rise in half-price offers was most likely due to them offering “a simple message” that “grabs consumers’ attention”, she adds, whereas multi-buys “can be hard to calculate”.

Tesco showed the largest increase in savings thanks to a heavy focus on single price point savings, with 83% of offers using save and half-price mechanics. At the same time, however, the retailer recorded the largest drop in promotional activity on a month on month basis, down 11.3%. It also saw the biggest year-on-year drop in savings, down 18.5%.

In terms of the most heavily promoted categories, Tesco and the Co-op were the only retailers to feature fruit & veg in their top 10 in the four weeks to 7 May 2017. Tesco offered savings of 30% and 31% for fruit and veg on average, which Staniland says offer “a good incentive for consumers to take advantage of some healthier options”.

On a year-on-year basis, however, the total number of Tesco fruit promotions was down 6.3%, while veg deals were flat. The drop in fruit was likely due to the retailer’s free fruit for kids, says Staniland. “Tesco is clearly working on more positive consumer messages than simply pushing a larger variety of promotions.”