When the public is asked what they believe are the biggest food safety issues, genetically modified foods are often mentioned.

To many, GM is synonymous with corporate greed and poor environmental outcomes. GM seeds and big-name herbicides are used in tandem and to excess, resulting in ‘superweeds’ resistant to chemicals, farmers beholden to mega-corporations and environmental degradation. 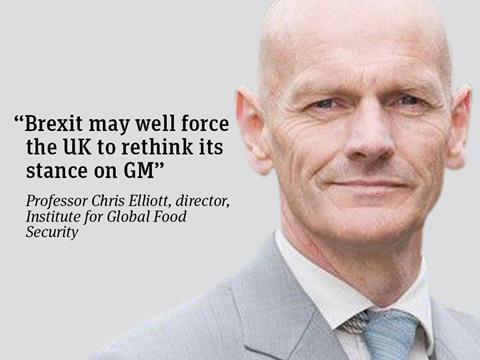 That’s a vast over-simplification, of course. GM technology has made huge strides in the past decade. Techniques referred to as gene editing (making small deletions or insertions into plant DNA) are producing some remarkable crops that are resistant to major diseases and produce more food from less inputs.

Of course, as a scientist, it’s easy for me to get excited about such developments, but that’s not necessarily the case for the general public.

Adverse consumer sentiment around GM and biotechnology is largely why Europe turned its back on GM many years ago. In the UK, however, we may well have to rethink that stance soon - not least because of Brexit. We could end up with massive issues in terms of getting enough labour to work on our farms and may be able to rewrite the rule book about what farming technologies we can and can’t deploy.

Over recent months I have observed more calls from the farming bodies for the UK to become a ‘biotechnology leader’, and we do have some of the best scientists in the world to deliver on this. I also read an interesting survey this week, which indicated two-thirds of millennials are relaxed about the use of new technology in food production.

I’m neither for or against GM. A few years ago I decided to look at each ‘innovation’ from a logical and scientific perspective. So how, as a nation, could we possibly adopt the same approach?

There will undoubtedly be groups adamant that introducing GM will be the end of civilisation and equally strong voices promoting the virtues of the technology. Certainly meaningful public consultation will be essential and led by the FSA.

Hopefully it won’t end in a referendum…