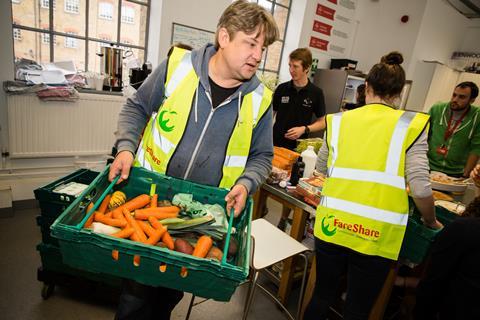 The government must extend its £5m yearly funding to stop tonnes of surplus food from being wasted, food charity FareShare has urged.

The food redistribution charity said that without the government’s continued financial support, around 53 million meals worth of food a year would be wasted.

“When you look at all of the data about how much food is being wasted within the UK and how much need and demand there is, and then you add in the environmental aspects as well as the social aspects and the financial aspects – it’s complete madness,” FareShare CEO Lindsay Boswell, told The Grocer.

The Food Waste Fund was launched in 2018 and helped those in the industry cover the costs of safely storing and transporting surplus food to charities, but was axed this year, with the government so far rejecting calls to renew it.

During the pandemic, FareShare has redistributed 19,000 tonnes of emergency food supplies donated by government and businesses, as well as over 35,000 tonnes of surplus food from farms and food producers.

The charity estimates one in eight people in the UK struggles to afford food, with the pandemic contributing to food insecurity for many families across the country. It said current demand from charities supporting families and children still remained at pandemic levels.

FareShare’s #FoodOnPlates campaign is encouraging members of the public to email their MPs and ask them to support the extension of the Food Waste Fund, as well as sign up to a letter to the prime minister, via the website foodonplates.org.

“What we’re trying to do is raise the issue and particularly raise awareness amongst the general public around this, so that every constituency MP can see and understand that not only did the electorate want this to happen but actually this is also going to give good-quality food to community and charity groups in the constituency,” Boswell said.

“The ultimate goal is to get the UK into a place where as much good-quality surplus food is being diverted to feed people in need.”