Asparagus crop set for another bumper year despite chilly spring 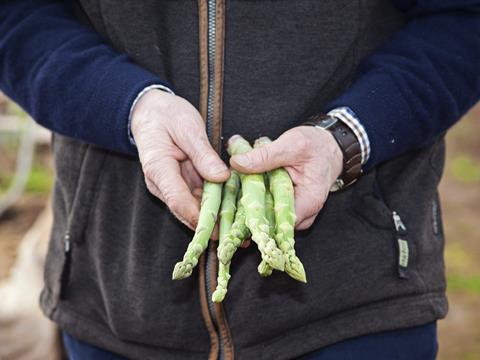 This year’s British asparagus crop is on track to match or even eclipse last year’s bumper harvest of 5.5 million kg, despite a slow start to the season, according to growers.

Although unseasonably warm weather during January led to some crop being harvested early, the overall season had been delayed by about three weeks as a result of the subsequent cold snap in February and March, said the Asparagus Growers Association - which represents more than 90% of UK growers.

However, an increase in acreage for the crop by 7% year on year means the amount harvested should at least be similar to last year, which was 2% up on 2014 levels and 24% higher than in 2011.

Existing growers had been expanding production to meet increasing retailer demand, and more growers were choosing the crop despite the difficulties involved with asparagus, which was relatively labour-intensive, the AGA said.

“It’s great news acreage is up,” British Growers Association CEO Jack Ward said. This is due to more and more people eating asparagus on a regular basis.”

Despite the delays ­earlier this year, the ­season will end around 21 June as planned because growers needed to “ensure the crowns have enough time to gain energy ahead of next year’s season”, AGA chairman Chris Chinn said. “The surprise spears in January were a great talking point, but the cool weather delayed the season start. But we’re now in full swing with plenty to go round and it looks like we are catching up on last year’s harvest.”