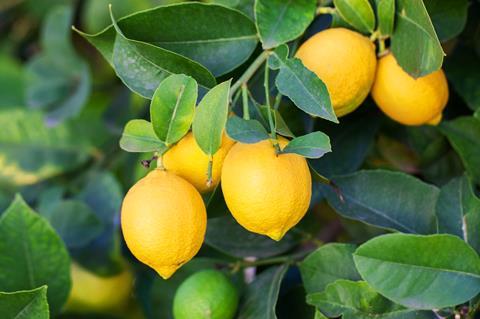 Lemon prices have risen by 45% since March

Wholesale fruit prices have soared since the start of lockdown, with further hikes expected in the coming weeks.

Increased retail demand, strained logistics, and concerns over labour shortages have all put pressure on prices.

Many fruits were at least a third more expensive than in March, according to Mintec, with lemons up 45% over the period. “The price of apples has also gone berserk,” said Ramnikh Kular, senior market analyst at Mintec.

The summer’s lemon stocks were expected to become increasingly strained as congestion at South African ports restricted the country’s exports. Almost half of the UK’s lemons typically come from South Africa from June to September, according to HMRC.

“They’ve got a large crop but I think it’s still going to get fairly tight,” said Eddie Fleming, director at JEM Fruits.

European fruit supplies are under similar pressure as bad weather continues to add further woe to farmers already dealing with seasonal worker shortages. Hailstorms in Spain this week annihilated much of the unprotected outdoor crop. “That will really put the cat among the pigeons for the Spanish melon season,” said Fleming.

Many importers were struggling to secure consistent supplies into the UK, with some Spanish growers abandoning contractual obligations to seek higher prices in the spot market, said Paul Rowe, sales and procurement executive at Poupart Imports. “If you had a contract for melons in May you may as well have ripped it up.”

The high prices are often difficult for importers to pass on, with many businesses now struggling to secure a profit. “We’ve done nothing like the kind of volumes we’d do in a normal season,” said Rowe. “Nothing like it.”