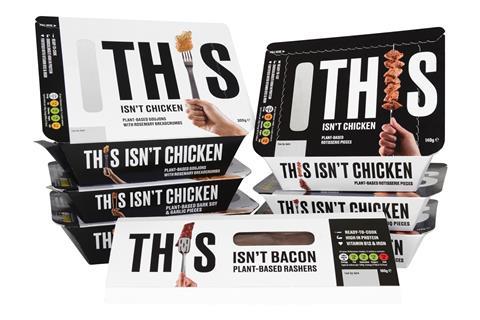 The campaign passed its initial £2m target before it was open to the public and has is currently overfunding at £3.78m from 1,797 investors.

The ‘fake meat’ brand, which produces pea and soy-based products such as its This Isn’t Bacon rashers and This Isn’t Chicken goujons, has raised the cash via a convertible loan note structure which will convert into equity at a discounted rate at the next £2m-plus fundraising round or in the event of an exit.

A number of venture capital funds who are existing investors in the business again participated in the funding round, including Backed, Five Seasons Ventures, Idinvest Partners, Seedcamp and Manta Ray Ventures.

The funds raised will be used to open a £1m plant-based innovation centre in London, where food scientists, engineers and project managers will come together to accelerate NPD for the business, as well as boosting manufacturing capacity and support growth through marketing.

The business, set up a year ago, is running at an annual growth rate of 700% and posted sales of £450k in July alone having secured listings with Tesco, Waitrose, Ocado, and Honest Burger as well as wholesaler Brakes.

Co founder Andy Shovel commented: “Pete and I can scarcely believe how quickly the Seedrs campaign has been building momentum. I haven’t clicked ‘refresh’ this often since my online dating days.

“We’re truly honoured that so many people have deemed THIS to be worthy of their investment; we’ll keep over-working and ageing abnormally fast, in the hope that we make them a massive return.”

The campaign has become the fastest fundraising effort on the Seedrs platform to hit a £1.5m target.