Beyond Burger gains national listing in pub chain All Bar One 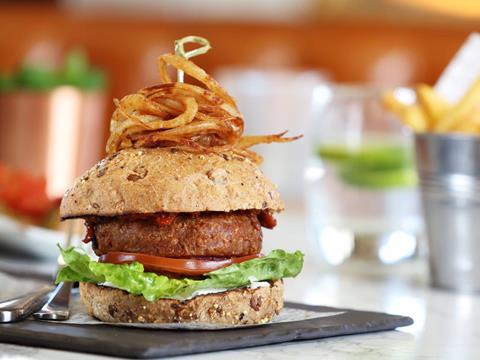 The much-vaunted Beyond Burger is a step closer to widespread UK distribution after securing national listings with pub chain All Bar One.

Sold as part of its ‘The Plant Based’ burger dish, the US-made pea protein-based patty went on sale in each of the pub chain’s 56 locations this week.

“All Bar One has embraced veganism,” said operations director Alex Dawson. “We’re proud to be the first nationwide bar to introduce this new innovation to our menu.”

Beyond Meat has also extended its deal to supply London-based restaurant chain Honest Burgers. The Beyond Burger is now available in all 30 of its outlets following a successful trial at its Kings Cross branch.

Opinion: Is Beyond Meat ready for the scrutiny involved with an IPO?

But the supplier is still no clearer on when it will go on sale in UK supermarket partner Tesco. It responded to questions on social media this week by saying it hoped to have the product on shelves “by the end of the year” and “sooner rather than later”.

The burger was due to roll out into 350 Tesco stores at the beginning of August. However, that launch was pushed back until the autumn due to “higher than expected demand”, said Beyond Meat executive chair Seth Goldman, and to “ensure that we have enough product to keep shelves full”.

It now faces stiff competition in the UK amid a glut of plant-based NPD.

British brand Moving Mountains was picked up by pub chain Marston in September, while the mults have all been beefing up their branded and own label offerings in recent months.