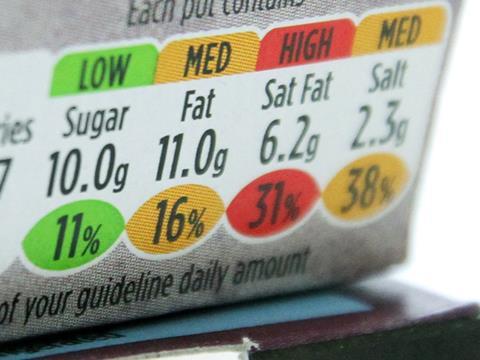 The IGD has published a new guide to try to end consumer confusion over traffic light health labelling on products on supermarket shelves.

Research by the industry body showed nearly half (46%) of shoppers felt the nutritional labels on the front of packs were too difficult to read.

Although the hybrid traffic lights/GDA scheme was introduced in the UK in 2013, it has struggled from lack of sign-up from major suppliers, with many consumers baffled by the system.

The IGD said the areas of confusion included widespread consumer ignorance over reference intakes (or guideline daily amounts), calories, portion size information and interpreting the colour coding on the front of packs.

It said the new guide would help companies provide information in a consistent way. Aldi, Asda, Brakes, Compass, Kingsmill, Morrisons, Musgrave, Nestlé UK, Premier Foods, Sainsbury’s, Tesco and Waitrose had all already signed up to use the guide, it added.

“The UK has led the way in the world in voluntary front-of-pack nutrition labelling, with industry and government working together to provide more information and display it in a helpful way,” said IGD chief executive Joanne Denney-Finch.

“We worked with shoppers to understand the challenges they have when reading nutritional labels and our research shows there is more to be done to help people use this information. The messages in the guide have been designed by shoppers for shoppers and so we’re confident our guide will help clarify some of the points of confusion.”

Duncan Selbie, chief executive of Public Health England, added: “Better nutritional information is a foundation of healthier food and drink choices. It’s great to see so many household names sign up to the IGD guide and commit to providing clear and consistent information to consumers. I hope it encourages others to follow suit.”

However, the move comes as a group of the biggest suppliers try to persuade the government to make major changes to the traffic lights system.

Coca-Cola, Mars, Mondelez, Nestlé, PepsiCo and Unilever want to introduce a new system across Europe that would include new colour coding for products intended to be eaten in small portion sizes.

The move, which has been attacked by the health lobby, would see products such as biscuits and confectionery automatically get an amber light for salt, fat and sugar if each of those elements represented less than 15% of the recommended daily reference intake.

The companies say the new system would address problems with the 2013 traffic lights, which has been snubbed by big players including Mondelez and Unilever, as well as Kellogg’s, Ferrero and General Mills.