Science for sale: does food and drink funding distort the debate? 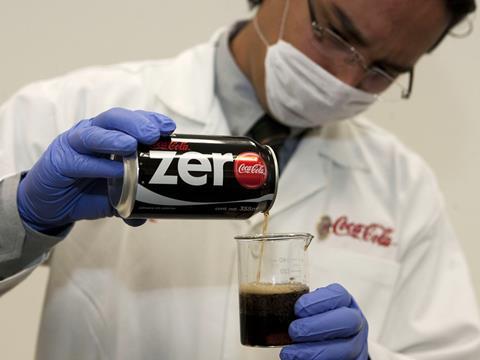 ’Scandal as scientists deny sugar link with obesity,’ The Times thundered in a front-page splash last Friday. Under the headline ’Fizzy drinks giant pays millions to diet experts’, it unveiled a catalogue of payments by Coca-Cola to (among others) the British Nutrition Foundation, the National Obesity Forum and the Association for the Study of Obesity - accusing Coca-Cola of “systematic efforts to undermine solid science on the health implications of too much sugar… and to distort the debate on sugar”.

Coca-Cola faced similar criticism in the US in August after grants of $1.5m to research group the Global Energy Balance Network (GEBN) were uncovered. With GEBN apparently downplaying the impact of diet on expanding waistlines the soft drinks manufacturer had enlisted “merchants of doubt” on the hazards of sugar, claimed professor of global nutrition Barry Popkin in the New York Times.

It’s not the only fmcg brand accused of corrupting science with cash. In February a British Medical Journal investigation unveiled “extensive” payments from brands including Mars, Unilever and Nestlé to scientists working for the Scientific Advisory Committee on Nutrition (SACN) and the Human Nutrition Research Unit.

So common were industry grants that of 40 scientists affiliated with SACN between 2001 and 2012 only 13 had no interests to declare, investigative journalist Jonathan Gornall found.

“The existence of such financial connections is not evidence of research malpractice,” Elizabeth Loder, BMJ’s acting head of research, was quick to say. “It does, however, contribute to perceptions that nutrition science might be for sale.”

So is industry funding of scientific research valid? And how can the right balance be struck to dilute suspicion?

Coca-Cola has said repeatedly how much it relies on scientific collaboration. “We need the evidence scientific research produces to make business decisions about our drinks and the ingredients we use, [and] to better understand aspects of health, like calorie intake and hydration,” says Jon Woods, general manager of Coca-Cola GB and Ireland. “Commissioning scientists to conduct research is important, as is working with third party experts.”

Woods cites the reformulation of 27 drinks since 2005 to reduce sugar and calories and the use of traffic-light nutrition labels as examples.

He adds: “As a major food and drink manufacturer, Coca-Cola has a role to play in tackling obesity” which necessitates collaboration with scientific experts.

And collaboration is beneficial for everyone, insists Barbara Gallani, FDF’s director of regulation, science and health. “No company can make advancements for scientific benefit or commercial benefit without collaboration with other companies, academics, and independent laboratories,” she says. “Otherwise you create a gap between pure research, and translation of that research.”

At the same time ongoing cuts to public funding - a review of Research Councils, through which the majority of taxpayer funding toward research is channelled, has just been announced as the Department for Businesses, Innovation and Skills (BIS) looks for £450m in savings -

makes the need for commercial support even more important. “The taxpayer cannot afford to fund all the research needed to improve our evidence base,” said ex-Science Council CEO Diana Garnham in response to the BMJ revelations.

Yet the fact remains that fmcg-funded studies into nutrition can look decidedly dodgy.Professor Marion Nestle, author of Food Politics, has openly accused Coca-Cola of encouraging GEBN researchers to “confuse the science and deflect attention from dietary intake.”

“Industry-funded studies are not about advancing science,” she says. “They are not about basic research. They are about marketing.

Influence is both subtle and subconscious, she suggests. “What you see are correlations. Industry-funded research almost invariably produces results favourable to the sponsor,” she claims. Of 75 nutrition studies funded by food and drink brands on Nestle’s blog, 93% returned results favourable for their sponsor. And claiming brands are only willing to put their money behind studies they stand to benefit from, other aspects of nutrition will be left neglected, she believes. After all “there would be no reason to do studies on the benefits of pomegranate antioxidants if the sponsor couldn’t use the results for marketing.”

Professor Peter Wilde, research leader at the Institute of Food Research, disagrees. “The vast majority of human studies are publicly funded” and tasked with prioritising the government agenda on “the health and nutrition of the nation” rather than pandering to industry, he adds.As for the small number that are industry-funded, there are “sufficient controls” to prevent any scientist being swayed by powerful sponsors, he believes.

“Industry may want to show their product in the best possible light but in my experience they’ve been open and transparent about the results,” he adds.

Even Nestle accepts industry studies can produce less favourable outcomes. In August, the Danish Dairy Research Foundation financed research that showed eating even modest amounts of butter could raise cholesterol more than alternatives such as oil. In late 2014 the American Pistachio Growers were left red faced after putting their money behind research that uncovered how the nut can actually hinder athletic performance.

But instances where less flattering results are published are “rare”, adds Nestle

In the UK there are several layers of control to try and ensure all results are honest. Any scientist signed up to one of the 41 member bodies of the Science Council will be supported by the full force of the group against undue influence, explains CEO Belinda Phipps. Members include the Institute of Food Science & Technology, the Physiological Society and the British Association of Sport and Exercise Sciences.

“Our professional registers hold practising scientists to a code of conduct which includes discharging their responsibilities with integrity, and having regard at all times to the public interest” she adds.

These will be supplemented by in-house ethical guidelines, such as those at the IFR, which “would not tolerate any influence from an outside body, even if they were funding us,” explains Wilde.

Researchers looking to publish results are also subject to Committee on Publication Ethics (COPE) guidelines. About 6,500 scientific journals are signed up to COPE’s code of conduct, which requires all funding to be disclosed and for published research to “preclude business needs from compromising intellectual and ethical standards”.

“Readers should be informed about who has funded research and whether the funders had any role in the research and its publication,” it adds. “When the results of these projects are published they [must specify] research participants and funding bodies and companies that have contributed to the research,” says Gallani. “That allows a level of transparency and openness so you can very easily check where research is coming from.”

All of which sounds pretty exhaustive but the system isn’t without its weaknesses. For one, there’s no onus to publish negative results when industry has provided the funds. “That’s their prerogative,” insists Wilde - though this would rarely apply to anything other than a study investigating the very specific health claims of a product, he adds.

More importantly, all guidelines are voluntary and there is no overreaching regulation to govern conflicts of interest.

Encouragingly tightening of controls does seem to be underway. This week The Grocer revealed SACN is to update its Code of Conduct to require members to declare research funding from industry (both current and up to 12 months previously).

But Phipps suggests a common regulatory framework might be required. “It might make sense for government to look at going further to make sure companies are required to behave properly,” she suggests, as the lack of overreaching regulation can currently “put scientists in a difficult position”.

Continuing to improve funding transparency will be vital going forward, Gallani adds. Industry also needs to be “open and transparent about research and its potential applications” she adds.

Coca-Cola has already taken steps following last week’s less-than-flattering coverage. It has committed to publishing a list of UK projects it has supported from 2010 onwards in the UK.

The media must accept part of the blame, suggests Wilde, for stirring up conspiracy theories with “sensationalised headlines”. “That’s where it often breaks down: things get misinterpreted and undue influence inferred where it may not exist,” he says. “Translation of the research into a story or information for consumption by the general public is a really tricky thing to do without trivialising it.”

Such criticisms were made against the BBC after the BMJ investigation, when it claimed to have uncovered evidence of the “extraordinary extent” to which key public health experts were involved with the sugar industry. “Although the interests mentioned in the articles are mostly factually correct (and a matter of public record),” say minutes from a SACN meeting in April, “the tone and the implications were not”.

With The Times splashing its investigation across the front page the media shows no sign of changing its tone though. That means industry must take steps - or risk a serious loss of credibility.

The Times allegations on Coca-Cola

Coca-Cola has given money to government advisers, including Carrie Ruxton, FSS board member who has found no proven link between sugar and obesity

Coca-Cola has provided financial support to organisations including UKActive, the British Nutrition Foundation, the National Obesity Forum, the British Dietetic Association and the UK Association for the Study of Obesity