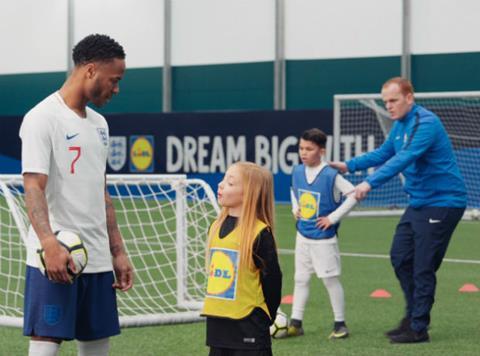 Dream Big with Lidl: England player Raheem Sterlingis challenged on how fast he can run

Lidl UK is launching a new TV advertisement marking its third year as the official supermarket of the England football team.

In the ad, children tell England players where they’re going wrong as they prepare for the World Cup, which starts on 14 June. It also promotes the supermarket’s football coaching programme for five- to 11-year-olds, called FA Lidl Skills.

Kyle Walker is told he doesn’t know what stress is, Raheem Sterling is challenged on how fast he can run, and Gary Cahill is told to act more like a lion during the 60-second commercial.

It’s set to be broadcast across a range of channels including cinema, social media and broadcast video on demand.

“The television commercial highlights Lidl’s involvement in grassroots football and how over the last three years the FA partnership has provided three million opportunities for boys and girls from local communities up and down the country to play,” said Lidl UK marketing director Claire Farrant.

“With the nation’s attention now fully focused on this summer’s tournament, we wanted to use this as a chance to inspire the next generation of footballers with our ‘Dream Big with Lidl’ campaign.”

FA commercial and marketing director Mark Bullingham said: “This innovative campaign brilliantly combines football participation with the nation’s excitement around this summer’s World Cup, two themes at the heart of the FA.

“Our partnership with Lidl has allowed the FA to invest millions into the grassroots game and help ensure that football is a sport for all.”