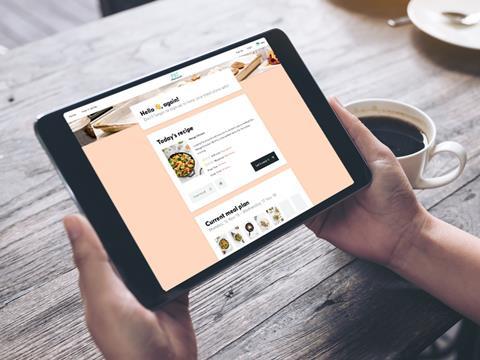 A new way of shopping from Ocado promises the convenience of meal kits at standard food prices.

An app and website developed by Home Run, known for rapid grocery deliveries in London, recommends recipes and automatically compiles ingredients into a basket in the user’s Ocado account.

Users then simply check out on Ocado, paying the online retailer’s standard prices. The shopping is delivered by Ocado in the usual way.

There’s no charge for using the recipe service, called Pat.

Pat personalises recipe recommendations by asking users about their dietary preferences and collecting information about their recipe choices. It also minimises waste by generating seven-day plans that ensure spare ingredients from one meal are used in another.

The website went live on 29 November at shoppingwithpat.com, asking visitors to add their email address to a waiting list. The service itself was due to launch the following day.

A smartphone app version will launch in a “few weeks”, according to Home Run CEO and founder Takis Malavetas, first on iOS and then Android.

A seven-day meal plan for a family of four could come to as little as £40, equating to £1.50 per meal, Malavetas said.

“The only way to do that [yourself] is if you are very smart in the combination of recipes and usage of ingredients,” he said.

“We try to have zero waste so you don’t throw anything away but you’re paying retail prices, so in the end it’s much cheaper than any other meal planning solution.”

Malavetas, a winner in The Grocer’s Top New Talent Awards 2018, said Pat had been launched with a different name because the service offered was a completely new concept, relying on Ocado scheduled delivery rather than on-demand.