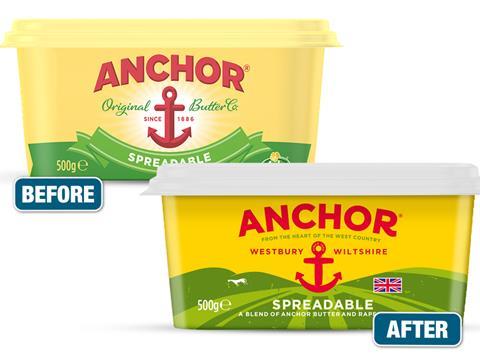 Arla has unveiled revamped packaging on its Anchor butter brand with a new emphasis on its Britishness.

The makeover, which will begin appearing on packs throughout July, will be supported by a £4.5m marketing campaign that will showcase the brand’s ‘real butter’ credentials, Arla said.

New packaging features a British flag to reinforces Arla’s drive to champion British dairy, an updated design of the Anchor logo and prominent references to Westbury in Wiltshire - home to Arla’s dairy where Anchor block butter and Anchor Spreadable are made.

The accompanying marketing push, which includes a return to TV screens by Arla’s Hugglers characters plus digital and in-store marketing, was created to emphasise that Anchor spreadable was made from real butter blended with rapeseed oil, the dairy co-op added.

“Anchor is a fridge staple, eaten and loved by British families around the country. We are delighted with our new packaging design and wider campaign, which celebrates Anchor’s superb quality in a way that resonates with today’s consumers,” said Arla Foods BSM category director Gareth Turner.

“We know those consumers increasingly want to know where the products they buy come from, so we believe it’s important to highlight that Anchor butter is made in Wiltshire, with milk from British farms, loud and proud on our packaging.”

Anchor butter was founded in New Zealand in 1886. Exports to the UK started in 1924 with marketing playing heavily on the product’s New Zealand heritage.

However, Arla, which holds the brand’s UK license as part of a long-term deal with New Zealand-based dairy co-op Fonterra, opted to halt imports for the UK market in 2012 and move production to Westbury. The move was initially met with stiff resistance from UK consumers.