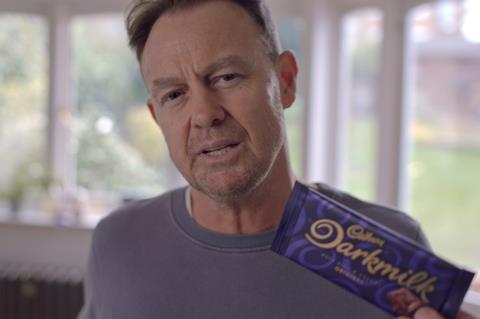 The two 30-second clips are aimed at “grown-ups”

The comical clips will make their small screen debut on Saturday (20 April), during ‘The Durrells’ and ‘Victoria’ on ITV. Featuring nods to the stars’ hits of the ’80s and ’90s, the two 30-second clips are aimed at “grown-ups” – in a reference to the older shoppers at which Darkmilk is aimed.

The ads, part of a £6m spend, will run until the end of May during Coronation Street and Emmerdale on ITV1, as well as First Dates and When I Grow Up on Channel 4.

They will be supported by short clips for digital and social media, featuring faux ‘behind the scenes’ footage from the TV shoots. It shows young film crew members failing to recognise Donovan and Wilde. Other activity will include PR and sampling of five million bars.

Darkmilk rolled out in September as a sharing bar in two variants. Mondelez expects the high-cocoa milk chocolate to become a £10m brand by the end of its first full year of distribution, and has already added a third flavour and single format.

Last month, Mars Wrigley Confectionery unveiled a similar product in Galaxy Darker Milk, which is 33% cocoa – a higher content than standard Galaxy’s 25% but lower than the 40% of Darkmilk.