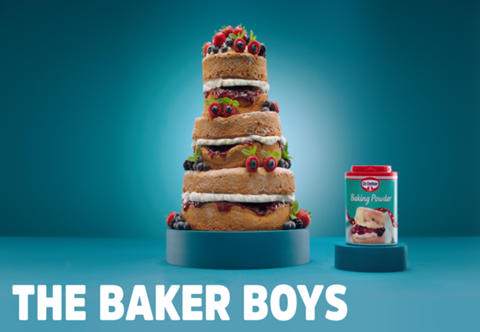 Dr Oetker has unveiled its “talking bakes” marketing campaign which will air alongside the new series of the Great British Bake Off.

The campaign, which features three talking cake characters, will be the first TV ads shown alongside the show since it moved from the BBC to Channel 4.

Promoting a raft of Dr Oetker products, the ads will feature in idents at the start and end of the show, rotating with ads from joint sponsor Tate & Lyle, and on pre-roll ads on catch up TV.

“The hotly anticipated arrival of the Bake Off in its new home on C4 will undoubtedly provide anticipation for viewers and the category,” said Dr Oetker executive head of marketing Jan McKee.

“Despite Bake Off generating great excitement and interest, the number of baking occasions in the UK has been declining for the past couple of years. Our campaign main objective is to re-engage shoppers with the category during Bake Off time, by conveying compelling call to actions in a humorous and relaxed tone of voice.”

Dr Oetker and Tate & Lyle are joint sponsors for the 10-week series and the partnership includes promotion on spin off shows Bake Off: An Extra Slice and the festive specials.