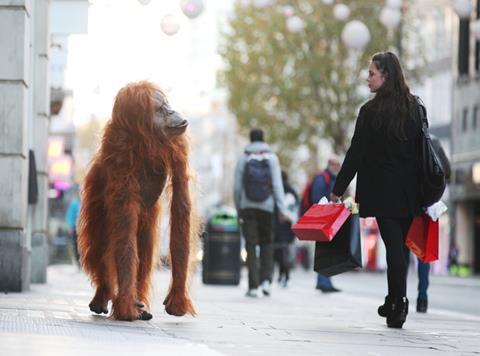 Iceland has followed up on its “banned” Christmas ad by revealing a life-like animatronic orangutan in a publicity stunt in London.

The puppet orangutan has been shown in Oxford Street, London parks and clinging to a Christmas tree on Coin Street.

A film tweeted by Iceland shows the ape strolling out of Oxford Circus Station as bystanders film it on mobile phones.

Are you on the lookout for a lonely Orangutan?

One is roaming the streets of London right now looking for a new home…#NoPalmOilChristmas pic.twitter.com/nGjbBUu3yo

Iceland’s ad is a rebranded Greenpeace animation featuring a baby orangutan who tells little a girl that his home has been destroyed by deforestation caused by palm oil production. The retailer said it wanted to offer consumers the choice of a palm oil-free Christmas, having pledged earlier this year to eliminate it from own label products by the end of 2018.

The film was blocked from TV by approval body Clearcast for breaking an advertising code rule against campaigns inserted on behalf of political organisations.

Iceland tweeted its “banned” ad instead, prompting thousands of retweets, an 800,000-strong petition to get it on TV and more than 12 million online views.

The remotely operated animatronic puppet in this morning’s stunt was created over months by special effects artists and controlled by a specialist puppeteer “who has spent years studying the movements of the species”, according to an Iceland spokeswoman.

Iceland MD Richard Walker tweeted: ‘Have you spotted our stranded orangutan around London? A stark symbol of the effects of deforestation and the impact of non sustainable palm oil. #NoPalmOilChristmas.’