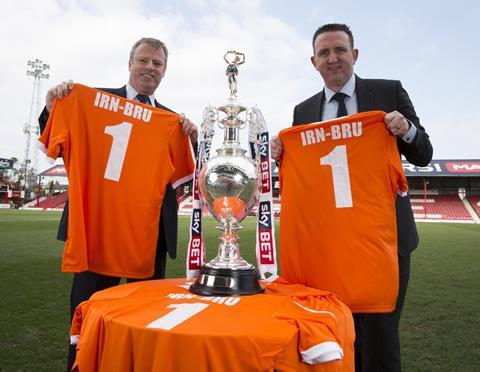 Scottish soft drink brand Irn-Bru has signed a sponsorship deal with the English Football League to be their official soft drink sponsor, and unveiled plans for a £6m national marketing push.

The three-year sponsorship, which will start during this year’s play-offs in May, involves clubs across the Sky Bet Championship, League One and League Two.

Irn-Bru owner AG Barr said the deal was designed to build on the brand’s popularity in England. Sales of the brand were static last year at £105.3m [Nielsen 52w/e 4 January 2015].

The company added the deal was Irn-Bru’s biggest-ever in terms of scale. The brand also sponsors the Scottish Professional Football League.

Meanwhile, Irn-Bru is continuing its Gets You Through marketing campaign with a new TV push that will kick off next month. The national activity follows marketing investment in the north of England, where AG Barr said Irn-Bru was now drunk by one in four 16-year-olds [TNS February 2014].

“Irn-Bru is an incredibly strong brand in Scotland and we have invested heavily in the north of England in recent years,” said AG Barr marketing head Adrian Troy. “This has delivered significant growth in flavoured carbonates and we’re now extending this support to a fully nationally basis.”

“The Gets You Through campaign really appeals to Irn-Bru’s core target market,” he added. “ The adverts reflect the cheeky, maverick attitude for which Irn-Bru is well-loved.”

AG Barr – which today (24 March) reported a 10% jump in full year pre-tax profits as sales grew across all its core brands – said Get You Through advertising has generated more than 10 million YouTube views.