Lynx gets major rebrand to appeal to gen Z shoppers 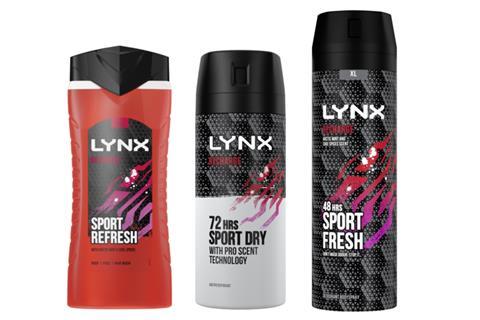 Lynx is undergoing a major rebrand in the hope of appealing to a younger, gen Z audience.

The Unilever-owned brand said it wanted its new-look range, which “doesn’t rely on gender stereotypes”, to appeal to both old fans and newcomers to the brand.

It has reformulated its entire range, which it said would help deliver up to 72 hours of “enhanced freshness” and “superior fragrance”.

Its new packaging, meanwhile, was designed in collaboration with street artist and illustrator Ben Tallon, who has previously worked with fashion brands such as Nike, Dr Martens and Adidas.

It has also rolled out a new range of sports products as part of the relaunch, called “Recharge”, which includes a body spray, anti-perspirant and three-in-one shower gel, face and hair wash, made with plant-based prebiotics (rsp: £2.84-£4.50).

The brand cited data which suggested three in 10 of the fastest growing deodorants for men were sport-based as its reasoning for doing so. [Nielsen 52 w/e 24 April 2021]

The relaunch will be backed by a “star-studded” £12m ATL media campaign, featuring the likes of Anthony Joshua, British rapper Aitch and internet personalities Calfreezy and Chunkz.

However, the rebrand comes after a difficult year for Lynx – and the wider deodorant category – thanks to the pandemic. Its sales slumped £7.5m in the supermarets last year, amid a £47m drop across the entire deodorant category [Nielsen 52 w/e 5 September 2020].

Despite this, Lynx said recent Nielsen data showed it had driven 60% of growth in the male deodorant category over the last four weeks [w/e 24 April 2021].