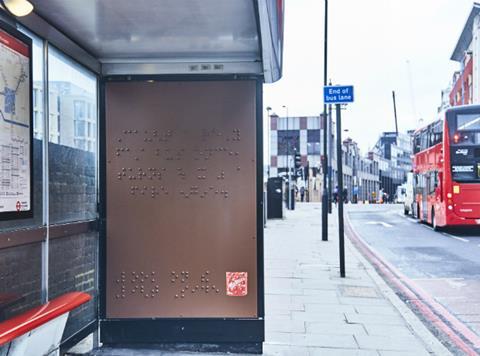 Comprising Braille made from fake Maltesers, the tactile poster forms part of the confectionery giant’s ambition to champion greater inclusivity in advertising and better represent disability in media.

It reads: “Caught a really fast bus once. Turns out it was a fire engine”, and was inspired by a real-life story from a focus group led by Maltesers and the disability charity Scope.

Designed in collaboration with AMV BBDO, the one-sheet in Farringdon is audio-enabled and automatically plays a recorded message every five minutes, letting people know it is written in Braille.

The one-off creative, which will run until 15 January, is the latest part of the chocolate brand’s Look on the Light Side campaign, which last year saw the first-ever UK TV ad entirely in sign language.

As one of the country’s biggest advertisers, Mars had a responsibility to champion greater inclusivity, said VP of marketing Michele Oliver.

“This small-scale activation is a natural next step in our ambition to get closer to our consumers by normalising disability in advertising and communications and using humour to challenge preconceptions.”