Why Thanksgiving is a major missed opportunity for British retailers 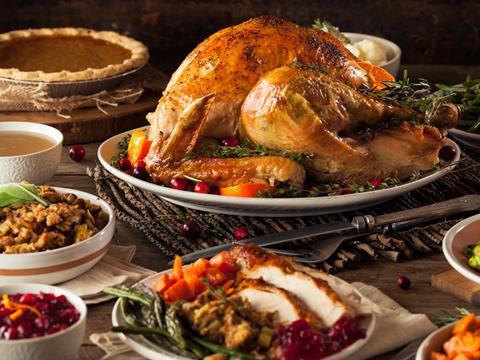 There’s no doubt grocery would be thankful to have a couple more big foodie events to hang its yearly hat on.

In the mad scramble of the run up to Christmas, which these days officially begins as soon as Halloween is done with, it can seem a bit of a stretch selling turkeys two months in advance. Unless you’re planning on several rehearsals for the big event, or just can’t get enough of mince pies, it makes more sense to the consumer to shop nearer the event and get everything fresh.

That’s why I find myself a little bemused grocery has skipped over a huge food-based event in the American calendar: Thanksgiving. Of course, you might have grounds for reasonable scepticism about whether Thanksgiving can work in the UK, but let me outline for you why your world-weary cynicism is misplaced.

Firstly, yes, it’s an American celebration for American reasons. But trust me, most of America doesn’t automatically connect Thanksgiving to its centuries-old roots, in the same way we’ve divorced Bonfire Night (an event that I found Americans were only too willing to celebrate, given that it involved setting things on fire) from its less-than-wholesome roots.

In fact, in the US it’s really treated as a time to be genuinely thankful for everything you have, with no religious or nationalist connotations.

Second, while a lot of the typical Thanksgiving fare is somewhat outlandish to the British palate (sweet potato and marshmallow casserole as a savoury side dish, anyone?), most of it isn’t a stretch. In fact, a lot of it is so similar to typical Christmas fare (turkey, potatoes, stuffing), that it’s a huge missed opportunity for supermarkets to shift some stock before the fresh Christmas shop begins in earnest.

We turned to IRI for a bit of data on a couple of typical crossover Thanksgiving/Christmas items, and the stats seem to show a big chance missed. In fact, supermarkets sell significantly more fresh (not frozen) turkeys the week AFTER Thanksgiving than they do in the run up to it. In 2014, for example, fresh turkey sales for the week leading up to Thanksgiving stood at £2.5m compared with £3.3m the week after – a sign that shoppers are buying more the closer it gets to Christmas but aren’t yet taking much notice of Thanksgiving.

It’s a similar story with cranberry sauce, a Thanksgiving staple as American as apple pie. Last year, it saw Thanksgiving week sales of £276k compared with £371.5k the week after, according to IRI’s data.

There are signs, though, that some aspects of Thanksgiving are beginning to translate to the UK market, however slowly. Mark Cowan, founder and commercial director of Happen UK, tells us ”the food-to-go market leads the way with the likes of Starbucks introducing us to pumpkin and spice flavours, which make our breakfast stops and lunch breaks more interesting.

“I have a feeling that something else is helping to drive this,” he continues. “If you think about the flavours and messages that accompany BBQ, Halloween, Thanksgiving, they all echo a return to simple cooking and homely flavours. If I was making a bet on the rise of Thanksgiving in grocery I would major on celebration of the home, simple and warming flavours.”

So, UK grocers, in summary: Thanksgiving is essentially Christmas without the presents. It’s a showy and expensive festival of food, but without the distraction of consumers having to spend money on non-food. Doesn’t that sound like a perfect opportunity to you?