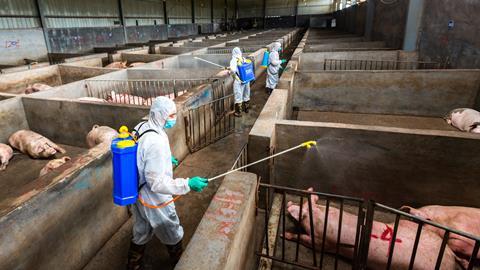 China’s meat industry is in crisis. According to experts, it’s ‘bigger than BSE’. African swine fever (ASF) - a pig disease with a mortality rate of over 90% - was first discovered in the Liaoning Province in August 2018 and has since spread to almost every region in the Chinese mainland, as well as Vietnam, Cambodia and Mongolia.

Authorities in China have already culled a million pigs in an attempt to control ASF, and the country’s pork production is set to drop by a third this year, according to Rabobank. That’s equivalent to Europe’s entire annual pork supply.

It’s left a protein gap of around 10 million tonnes for the rest of the world - including the UK - to fill. So, to what extent is the UK pork industry benefiting? And what could this mean for pork prices here?

UK shipments of frozen pork and offal to China were up 40% year on year in the first quarter of 2019, says Jonathan Eckley, head of Asia Pacific export for the AHDB. Which suggests the ASF outbreak has already given a boost to UK processors with plants approved for direct exports to China - namely Karro, Cranswick and Tulip.

In Cranswick’s results for the year to 31 March 2019, profits rose 2% on a like-for-like basis to £92m on the back of strong export growth to Asia, with volumes to the Far East up 16.1% year on year, it said, and export prices to China strengthening in the second half as a “direct result” of the ASF outbreak.

However, while the EU reference price has rocketed by 30p/kg since early February to stand at nearly 147p/kg in mid-May, the UK pig price has barely moved, says the National Pig Association. So UK pig producers are yet to benefit from the China export boom, it claims - calculating that British producers have lost out on over £8m since mid-April as a result of the “failure of pig prices to rise in line with the EU”.

Processors are blaming the slow movement in UK pig prices on the after-effects of Brexit stockpiling and weak domestic demand - which led to an oversupply earlier in the year.

“All pig processors probably killed too many pigs in January and February this year,” Tulip agriculture director Andrew Saunders told producers at a conference this month. “We had slow and weak demand and we filled our freezers up. We were all preparing for 29 March, which didn’t happen.”

With more European pigmeat getting sucked into China, the influence of Brexit stockpiles is beginning to wane, and UK pig prices are now starting to respond. In the week ended 18 May, the UK-spec SPP rose 1.47p to average 141.85p/kg during the week, according to AHDB. And prices are likely to keep rising through the summer, says Justin Sherrard, global strategist for animal protein at Rabobank. Which - while good news for British pig farmers - could eventually put the squeeze back on processors. Higher export sales to China are unlikely to offset the losses they’ll face if they can’t pass on higher prices for pork.

Most worrying of all, though, is that the ASF outbreak hasn’t stopped in Asia. It is spreading through Eastern Europe and was recently found in wild boar populations in Belgium. If it arrives on British shores, the impact on the UK pork industry would be as devastating - and long-lasting - as BSE was to beef.