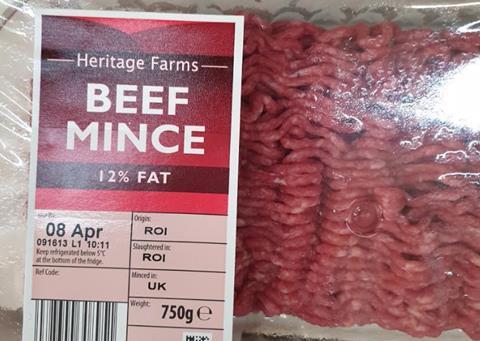 Aldi is selling Irish beef mince as a special buy

The mults switched to a UK and Irish sourcing model for fresh beef in the wake of 2013’s Horsegate scandal.

But with coronavirus-linked panic buying leading to supply and demand imbalances in recent weeks, Asda and Sainsbury’s have both looked to Poland to meet soaring demand for mince.

Aldi, which has a 100% UK sourcing policy for core fresh beef, has been selling Irish beef mince in stores. However, it said the SKU was a special buy.

It follows warnings from the British Meat Processors Association last week that soaring mince volume sales in the mults - which jumped by 45% last month [Kantar 4 w/e 23 March] - were detrimental to the beef supply chain due to carcase balance issues. It added this week that 60% of all beef sold through the mults was now mince or other low value cuts, as it called for support from retailers in selling higher value beef.

Farming bodies have critised the shift to imported beef, with the Ulster Farmers’ Union accusing Sainsbury’s, Asda and their beef processor ABP of “underhand tactics”.

Both Sainsbury’s and Asda this week insisted they remained committed to sourcing British as much as possible, and were merely reacting to increased demand. Sainsbury’s had “experienced exceptionally high demand for certain cuts of meat” and would “go back to offering our usual range as soon as possible”, a spokeswoman added.

Asda said its “main priority during these uncertain times is to ensure we can provide groceries week-in-week out for our customers”.

Meanwhile, a spokeswoman for Aldi pointed out its Irish mince was a “supplier brand ­special” only, introduced to meet increased demand, and therefore separate to its UK sourcing ­commitment for core fresh meat.

NFU chief livestock adviser John Royle said the union had been assured the sourcing decisions had been “a one off”. However, he warned supermarkets had their part to play to ensure other cuts of meat were also stocked sufficiently during the coronavirus crisis.

“Consumers will support British farmers at the right price, they just need the choice. I would urge the retailers not to just focus on the mincer.”