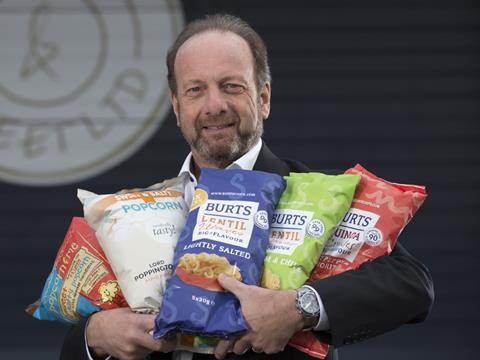 Burts Chips has diversified to include a wider range of healthier products, as well as popcorn, thanks to the takeover of own-label manufacturer Savoury & Sweet.

The acquisition, for an undisclosed sum, is the company’s first since its foundation in 1997, with Burts MD David Nairn eyeing further bolt-ons as he drives turnover towards a £100m target.

Savoury & Sweet makes products for UK household-name brands and private label ranges for major retailers, as well as its own premium popcorn under the Lord Poppington’s brand. It has invested heavily in manufacturing equipment, R&D and NPD over the past two years after bagging multimillion-pound backing from a fund advised by a division of global private equity giant Permira.

As part of the deal, Burts bought the company’s 71,000 sq ft site in Leicester. All 99 employees will be retained and the business will be rebranded Burts Snacks.

“The Burts business has grown significantly over the last five years, from £11.4m in 2013 to an anticipated £37m (post-acquisition) for 2017,” Nairn said. “Our ambition is to drive the business to over £100m in the next five years to become the UK’s biggest player within premium snacking. While organic growth of our existing operation in Plymouth is a big part of this and anticipated to reach £70m, acquisitions of like-minded and complementary businesses will help us accelerate our expansion.”

Privately owned Burts has featured in The Grocer Fast 50 for the past two years and has been located in Plymouth since it formed two decades ago. The company has invested more than £12m in the past five years at its 168-employee facility and at its fast growing ‘better for you’ business, increasing capacity to 200 tonnes a week.

Nairn added: “To realise our ambitions, it was clear that we needed to expand not only our capacity but also diversify our product portfolio with new technologies and innovations. Our wish was to achieve this within Burts and extend our own capabilities rather than look at the co-packing arrangements that some of our competitors have used. We therefore needed to identify high quality existing businesses with a similar ethos of quality as us, but who could offer different snacking expertise and format technology. Savoury & Sweet fulfils both of these aims.”

Burts’ aim is to expand its ‘better for you’ business next year to £30m, creating additional jobs and tripling production capacity through investment in additional lines all within the current footprint of the existing Savoury & Sweet Leicester plant.

“This is an exciting time for Burts. NPD is high on our agenda and we are looking forward to bringing new and exciting innovation that will challenge the current UK snack market,” Nairn said.

Kettle Foods MD Ashley Hicks said competition in the UK had been “very intense” and the company increased investment in the brand to protect market share.

Seabrook Crisps said that the year to 26 March 2017 had been “extremely challenging” as supermarkets lost share to discounters and rationalised space in crisps and snacks.

Category deflation and new pricing and promotion legislation contributed to Seabrook revenues falling from £27m to £24.5m. However, investment since the LDC-backed £35m MBO in 2015 had cut costs and waste, bolstering margins. Pre-tax profits rose a further 12% to £4.5m as a result.

Seabrook expects to return to topline growth this year thanks to investment in capacity, new own label business wins and expanding exports.

CEO Jonathan Bye said: “While revenues remain challenging as competition between retailers increases and category space is reduced in the UK, our strategies in increasing our business internationally, winning own label contracts, growing the Seabrook brand and focusing new product development into new categories, ensure we are well placed to grow the business in 2018 and beyond.”