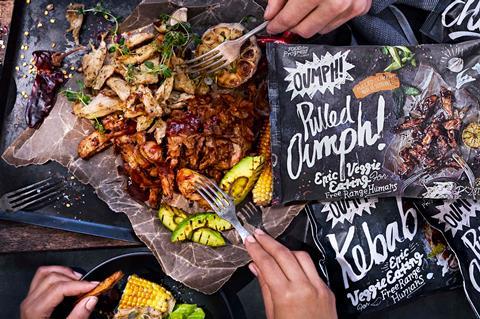 Swedish plant-based brand Oumph, which is sold in the UK by Tesco, Asda and Whole Foods Market, has been acquired by recently launched brand collective The Livekindly Co.

The brand, first introduced by parent company Food for Progress in 2015, joins the recently purchased Fry Family Food Co and LikeMeat in the growing portfolio of The LiveKindly Co, which said its aim was to build an “ecosystem of founder-led plant-based consumer brands”.

The value of the Oumph deal, announced today, was undisclosed. However, the acquisition would help The LiveKindly Co – which launched in March and adopted the name of the LiveKindly vegan news website it also bought this year – become one of the world’s largest plant-based food companies “at scale and at speed”, said CEO and chairman Kees Kruythoff.

The business attracted more than $200m in a founders’ fundraising drive at launch, giving it “real firepower to support our brands”, added Kruythoff.

It also boasted a number of global fmcg heavyweights in its senior executive team, with Kruythoff having extensive experience of running global Unilever divisions, and other personnel having worked at the likes of Ferrero, investment vehicle The Blue Horizon Corporation and Nestlé.

Headquartered in New York and Zurich, LiveKindly planned to accelerate product innovation through the Oumph brand, Kruythoff added. Oumph’s meat-free meatballs, which recently launched in Sweden, would be the brand’s next piece of UK NPD, alongside bacon substitute line Smoky Bits. Both would hit UK supermarkets “soon”, he said.

The Oumph brand stood out for its disruptive branding, unique taste and texture, Kruythoff added.

“The LiveKindly Co is leading a movement to build a more sustainable future through our portfolio of brands,” he said. “Bringing Oumph into the family was a natural next step for us. Their commitment to plant-based food quality and protecting the planet mirrors our own as we accelerate our mission to make plant-based eating the new normal.”