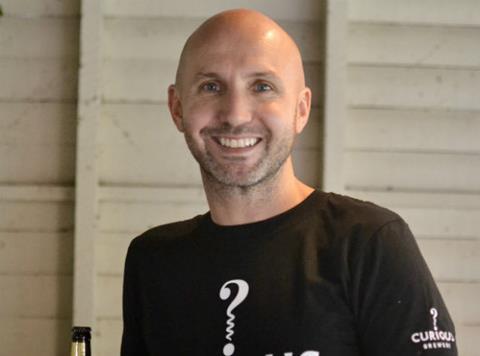 English winemaker Chapel Down has hired former BrewDog MD Gareth Bath as part of an “ambitious” push for its Curious beer and cider range following a successful crowdfunding bid.

Bath, who left BrewDog in August just nine months after being promoted to the helm of the Scottish brewer, has stepped into the role of MD for beer at Chapel Down Group.

He will be responsible for the “growth and development” of Chapel Down’s premium beer and cider brand Curious, which is eyeing UK and international expansion after £1.7m was raised through an equity crowdfunding Seedrs campaign and placing earlier this year.

“Gareth will bring a new level of energy and expertise to grow the Curious business and brand to greatness,” said Chapel Down CEO Frazer Thompson. “With his blue-chip background and the tremendous success he enjoyed with BrewDog, he’s a great addition to our board and will give the whole business an immediate boost.”

Bath, who was reported to be setting up his own business called Business Hacks when he left BrewDog in the summer, said he was “really excited” to be joining Chapel Down.

“I love the proposition on the beers - they are unique - and I am looking forward to building the new brewery, creating a great team, giving the consumer an amazing experience and exciting the trade,” he added. “We can take Curious on to the world stage.”

It comes as Chapel Down unveiled a fresh new look for the Curious line-up, centred around its strapline; ‘Made by Winemakers.” The shape of the new 33cl bottles (rsp £2) nods to the silhouette of a sparkling wine bottle, while a new logo features a corkscrew question mark to celebrate the brand’s winemaking heritage.

“The beer drinkers’ palate is changing and consumers want more. The wine expertise we bring is the difference. It’s a sensational beer,” said Thompson.

“We wanted to create a new look for the brand that did justice to the beer and stands out in a crowded market. It reinforces Curious Brew as a highly premium English lager with a winemaker’s complexity, style, intelligence and elegance.”