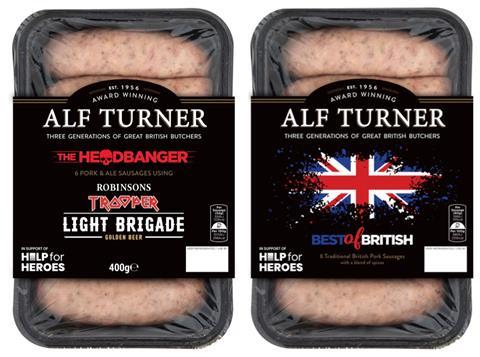 The pork and ale sausage is made using Robinsons’ Trooper Light Brigade beer – developed in conjunction with heavy metal legends Iron Maiden – and inspired by the band’s 1983 song The Trooper.

The sausage will go on sale nationally and exclusively in 400 Morrisons stores on 27 March alongside Alf Turner’s relaunched Best of British banger, with both products made by ABP as part of a new manufacturing deal with the red meat giant (rsp: £2.75/400g).

Owner Paul Turner, who attracted investment from Dragons’ Den star Peter Jones in 2012, said the tie-up with the Robinsons beer brand made sense due to their shared interest in raising cash for Help for Heroes.

Alf Turner has raised £185,000 for the forces charity in recent years, and hoped to reach the £250,000 mark this year on the back of the Trooper partnership, he said.

Both lines boasted a lower meat content to many currently sold in the mults and use natural casings. They filled a “gap in the market for a traditional British banger”, added Turner, who stressed higher meat content did not necessarily mean a better tasting sausage.

“These sausages contain 78% meat, and are based on our traditional recipe, which we think gives us the edge and offers something unique in the supermarkets: traditional butchers’ quality.”