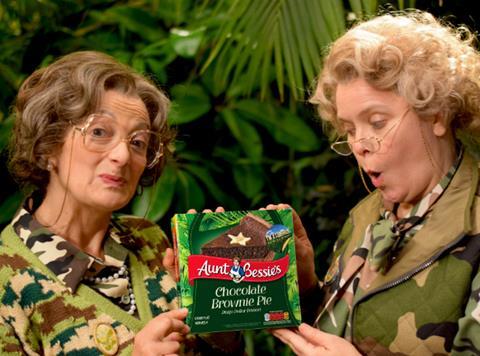 Aunt Bessie’s is launching two new products as part of its sponsorship of I’m a Celebrity Get Me Out of Here - which will also see the frozen food brand offer shoppers the chance to win a holiday to Australia.

With the ITV reality show set to begin its 16th series on 13 November, Aunt Bessie’s is rolling out the jungle-themed Bushtucker Bites, a mix of potato and sweet potato pieces in the shapes of stars and snapping crocodiles (rsp: £1.89/500g). The NPD will be joined by Dingo Dollar Dessert pie, a chocolate pastry case filled with chocolate brownie (rsp: £1.50/390g).

As part of its three-year tie-up with I’m a Celebrity, which began in 2015, Aunt Bessie’s has hidden 100 star-shaped puddings in its 220g packs of 12 Golden Yorkshires. Shoppers who find a star will be invited to submit a reason why they ought to bag a family trip Down Under. A panel of judges will pick the winning entry in December.

This month will also see the return to TV of Aunt Bessie’s ad characters Margaret and Mabel, who will be seen in a jungle.

“We’re really pleased with how the sponsorship is progressing,” said the William Jackson Food Group brand’s marketing director, Lorraine Rothwell. “I’m A Celebrity is one of the best loved shows on TV, so it’s definitely very exciting for Aunt Bessie’s to be associated with it.”