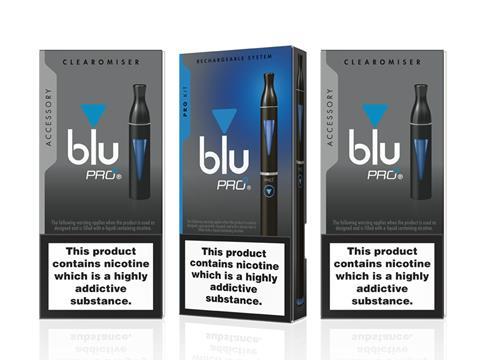 E-smoking brand Blu has unveiled its next-generation range ahead of the deadline for retailers to sell off stocks that don’t comply with strict EU legislation.

From 27 May 2017, it will be unlawful to sell vaping products that contravene EU Tobacco Products Directive II (EUTPD II), which focus on quality and safety, and include the requirement for a product warning stating, “This product contains nicotine, which is a highly addictive substance.”

The new EUTPD II-compliant line-up from Blu will roll out on 1 November with improved technology ‘to provide a better experience for consumers’. It includes a PRO e-cig kit, with a Clearomiser mouthpiece, and a selection of e-liquids.

The brand has also launched a guide to EUTPD II to help retailers understand the changes being put in place.

The vaping market was booming, with a retail sales value of £168m and showing an 18% increase on sales last year, according to Jennifer Roberts, vice-president of customer marketing at Blu (UK). “But it’s going to see a lot of change over the next six to nine months as the next stage of legislation comes into effect,” she added.

Retailers should begin to promote non-compliant stock to sell through, said Roberts. “By beginning the changeover to compliant stock as soon as possible, retailers will give a positive message to shoppers and show they understand the category and are a credible vaping stockist.”