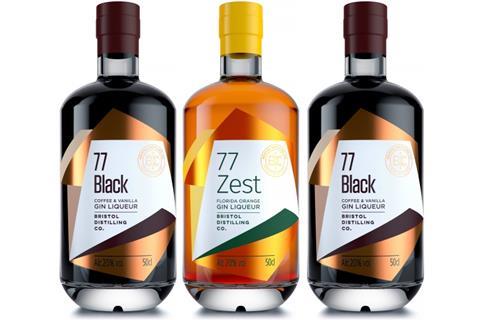 Bristol Distilling Co has unveiled a duo of new flavours just months after securing a major deal with Tesco to stock its drinks.

It has added 77 Zest, a Florida orange-flavoured gin liqueur, and 77 Black, a cold brew coffee and vanilla flavoured liqueur, to its roster. They are both 20% abv and would be available from “the second half of the year”, said the brand (rsp: £18/50cl).

77 Zest was ”best served over ice with tonic or Sicilian lemonade, or splashed into a glass of prosecco for a refreshing spritz”, it said, while 77 Black was best served “near over ice or shaken into a luxurious Espresso Martini”.

Its sales and marketing director Guy Dodwell, who left Diageo to join the fledgling business last year, said Bristol Distilling Co was “delighted with the progress of 77 Berry and 77 Blush to date, backed with a strong national PR and marketing plan, and look forward to creating further shopper excitement and growth”.

The distillery also makes a core gin called Gin 77 and plans to extend into further spirits categories in the future.