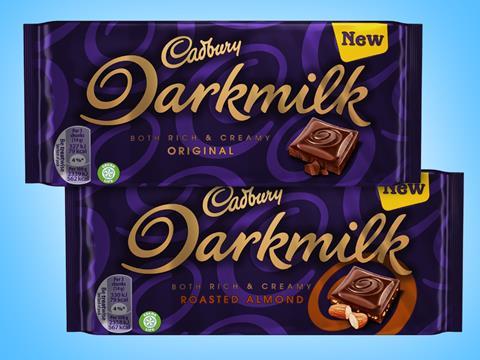 Mondelez is set to take a niche style of confectionery into the mainstream with the UK launch of Cadbury Darkmilk – a high-cocoa milk chocolate.

Made with 40% cocoa solids and 14% milk solids, Darkmilk offers “a more grown-up taste” than the likes of Dairy Milk, which is 23% cocoa and 20% milk.

The new range would appeal to older consumers who “find dark chocolate a little too bitter” said Mondelez. In comparison, Cadbury’s dark Bournville, most popular with over-55s, is 36% cocoa with no milk.

The result of two years’ development, Darkmilk will be available from early September in Original and Roasted Almond (rsp: £1.49/85g) – with each segment stamped with a D in the style of the Cadbury logo’s curly C. The sharing bar will be followed in the new year by a single.

Having achieved success with Darkmilk in Australia, where first-year sales hit A$18m (£10.3m), Mondelez said its ambition in the UK was “for a £10m brand (RSV) by the end of its first full year of distribution – around 18 months to two years’ time”. The launch will be supported by a £6m investment, including in-store activation, PR and digital activity.

While Darkmilk marks a departure for Cadbury, high-cocoa milk chocolate is not a new concept. Artisanal brands Montezuma’s and Divine Chocolate, for instance, offer premium 54% and 45% cocoa variants respectively. However, this is the first time one of the UK’s top confectioners has added a standard dark milk chocolate.

“A range of products and tastes are required to give consumers variety and choice, and that’s why we are expanding the Cadbury range with a brand new type of chocolate,” she added.