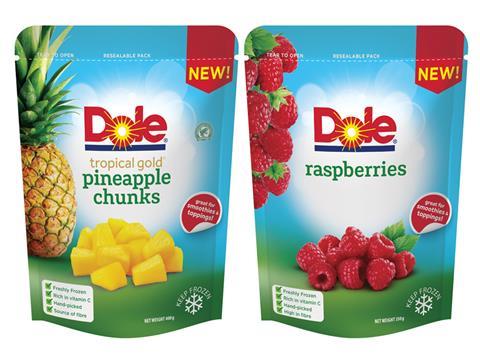 Dole Packaged Foods has jumped on the smoothie bandwagon with the launch of a new frozen fruit range backed by its largest marketing investment in five years.

The range, which started rolling into Sainsbury’s and Morrisons this week, represented the biggest branded launch to be seen in a frozen fruit category dominated by own label, and would be supported by a multimillion-pound marketing push, the supplier said.

Dole said each resealable pack contained 100% fruit and could be used in cooking and baking as well as for smoothies and breakfast toppings.

The brand, which has sold similar products in the US for years, said the range would help consumers increase their fruit intake in a “quick and convenient way”.

“Dole has successfully led the rapid growth and development of the frozen fruit category in the US over the course of the last 10 years,” said a spokeswoman. “By combining the strength and credibility of the brand with our expertise, we believe we can accelerate the growth of the ­category in the UK.”

Dole marked the range’s launch with an event in central London this week, which featured 3,000 smoothie samples made with the frozen fruit packs given away on the South Bank.

Three giant smoothie ice sculptures in the shapes of fruit were also positioned along the river to promote the launch.