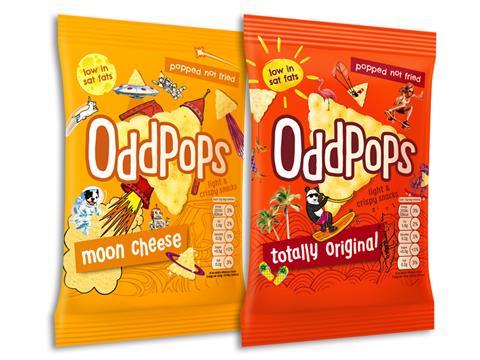 Ella’s Kitchen is taking its portfolio beyond babies and toddlers with the launch of Oddpops, a healthier snacking brand for older children.

Having pioneered pouched babyfood – and become the UK leader in its category – Ella’s Kitchen has turned its hand to crisps for ages four to seven.

Positioned as “a healthier, tastier and better snack”, triangle-shaped Oddpops are made with wheat and potato. They are popped rather than fried, making them low in satfat – no more than 1.3g per 100g.

The crisps use natural flavourings and contain no artificial colours or preservatives. Each 15g bag (rsp: 65p) contains a maximum of 60 calories (398kcals per 100g).

Two variants, Totally Original and Moon Cheese, are being soft launched now after 18 months’ development, with distributor RH Amar “having conversations with various stockists”. An overseas rollout of a 75g pack is planned for later in the year.

The brand has pledged to donate 10% of profits to charitable causes that “help kids develop a happy, healthy relationship with food”.

While Oddpops feature no Ella’s Kitchen branding, they were created by the Hain Celestial-owned business after it “felt there was a need for a fun new brand which is really engaging for kids”.

Oddpops marketing director Kim Gelling said: “Innovation is at the heart of everything we do, and we continually strive to challenge the norm and develop healthy snacks we know kids will love.”

The launch comes a year after Ella’s Kitchen was criticised for its sugar content following a Channel 4 investigation. The Daily Mail claimed the brand’s recipes contained up to five teaspoons of sugar per pack.