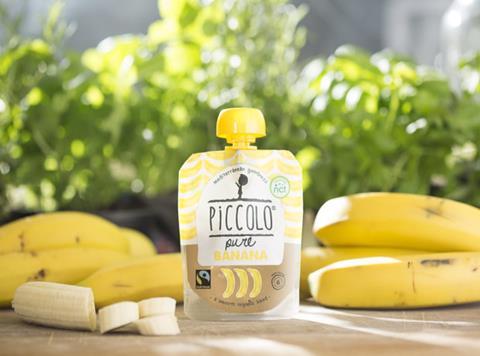 Piccolo has unveiled its second NPD of 2017 - which the startup brand claims is the first UK babyfood range to include Fairtrade-certified ingredients.

Comprising four options in a 70g pouch, Piccolo Pure is set to land on shelf next month in Waitrose, with its Banana and Mango variants bearing the Fairtrade stamp for fruit sourced from certified farms in Guatemala and Ecuador. The organic lineup is completed by Stanley Plum and Williams Pear, and is intended for both stage one and stage two feeding (rsp: £1).

Since its launch last year, working with Fairtrade produce had been one of Piccolo’s sustainability goals, said the brand’s founder Catherine Gazzoli. “We are incredibly proud to be the UK’s only baby food to be hold Fairtrade accreditation and to be supporting such an important initiative.”

The NPD follows Piccolo’s two stage one variants launched in January, and comes after the brand announced exclusive partnerships with the aim of reaching five million new parents. Set to be supported by social media initiatives and on-pack promotions throughout the year, the tie-ups with parenting groups Hartbeeps, Water Babies and Buggyfit were to create “an exclusive and extensive network that helps parents embrace health and well-being initiatives”.