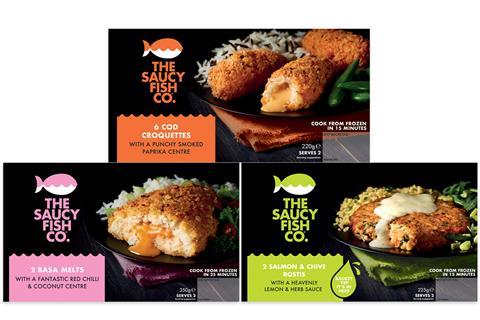 The lineup also features basa melts (rsp: £4/350g), designed to appeal to meat-reducing shoppers as a lighter alternative to a chicken kiev, as well as croquettes (rsp: £2.25/220g), which it said provided “the perfect entry point to bring incremental young shoppers into the frozen category”.

Grimsby-based Saucy Fish Co unveiled the lines at the Boston Seafood Show this weekend, announcing plans for the lines to roll out into UK retailers later this spring.

Each of the new lines cook from frozen in 25 minutes or less, in response to increasing demand for quick and easy dinnertime options, it said.

“We studied the impact of rising trends like flexitarian diets and new habits such as meat-free Mondays on consumers’ dining choices, which directly inspired our new rösti products,” said sales and marketing director Amanda Webb.

“All three new product categories deliver against our promise to add a splash of colour and brighten up an otherwise bland category. This new range is our most innovative to date and we’re confident it is the boldest fish product in the freezer aisle.”

The move comes after The Grocer first reported the brand’s plans to move into the flexitarian market last November, while it also looks to be considering a vegan range, after registrating a trademark for The Saucy Vegan Co last month.