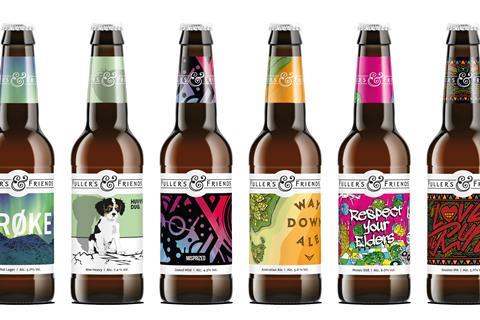 Fuller’s has teamed up with some of the UK’s top craft brewers for a second ‘Fuller’s & Friends’ limited edition six-pack.

The Chiswick-based brewery worked with brewers from Magic Rock, Tiny Rebel, Mack, Stone & Wood, Woodstock and Pilot to create the six-packs, which roll into Waitrose from 29 April (rsp: £12).

Included in it are: Misprized, a 4.5% abv oaked mild (Magic Rock), Respect Your Elders, a 6% ‘tropical’ interpretation of Fuller’s ESB (Tiny Rebel), Kroke, a lager with Nordic crowberries (Mack), Way Down Ale, a 5.8% brew with three varieties of Tasmanian hops (Stone & Wood), Love on the Run, a 5% session IPA (Woodstock), and Huvvy Du, a 7.4% ‘Wee Heavy’ scotch ale made with six malts.

Each beer “has its own story and the level of care and passion that went into them can be tasted with every sip”, said Fuller’s head brewer Georgina Young, who is shortly departing to join Bath Ales.

Fuller’s brewing company and beer brands have been snapped up by Peroni owner Asahi in a £250m deal, which is expected to close this weekend (27 April), with Fuller’s set to focus purely on its pub estate (which is significantly more profitable than the brewery).

Read more: what does Asahi’s aquisition of Fuller’s tell us about the state of British brewing?