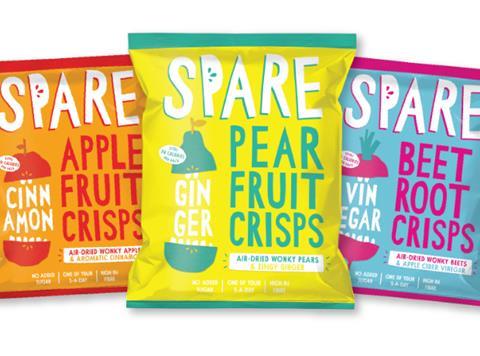 Spare Fruit, the startup that turns unwanted fruit into air-dried crisps, has renamed itself Spare Snacks as it prepares to expand into veg.

The business will officially launch its new identity and redesigned packaging at the Lunch expo later this month in London, adding a Wonky Beetroot variant to its core lineup.

It will also introduce a “healthily seasoned” range comprising Pear with Ginger, Apple with Cinnamon and Beetroot with Apple Cider Vinegar – with an eye to expanding the brand’s presence into the major mults, coffee shops, pubs and hotel chains. All snacks come in a 22g bag (rsp: £1.10).

The overhaul and expansion comes after Spare Fruit secured an Ocado listing in February, following a Seedrs campaign that raised almost £421k. And it moves the startup – which is also in Selfridges, Planet Organic and independent cafés and health stores – towards its target of saving 5,000 tonnes of surplus fresh produce over the next five years.

The business had “worked tirelessly to improve and expand our range while ensuring everything we do is good for people, producers and the planet” said founder Ben Whitehead. “It’s the perfect time to offer something appealing to a wider audience of savoury and indulgent snackers who believe in our mission to waste not, want lots.”