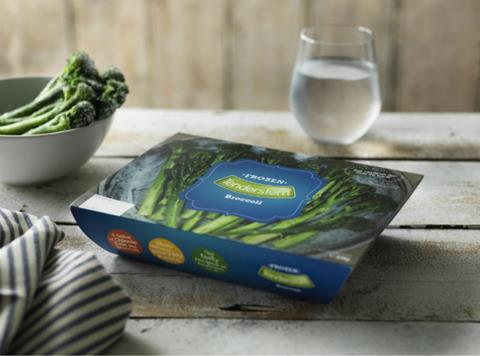 Tenderstem broccoli has made its first foray into the frozen aisles after launching in Iceland.

Frozen Tenderstem broccoli went on sale nationally in the discounter on 2 January (rsp £1.75/270g). Brand licensor Coregeo said it was also eyeing listings with other supermarkets in response to positive feedback received since its launch.

The product was developed by importer and supplier TSA International over the course of a decade, said TSA general manager Sarah Jackson. The veg is hand-picked in Kenya before being packaged and frozen within hours - a process that retains the vitamins and nutrients found in the raw product.

Packs contain individually frozen stems that are entirely edible, meaning no preparation is required. The focus on convenience was also key for the brand, which has designed the product to cook in as little as two minutes from frozen.

The launch follows a bumper year for the Tenderstem brand globally, with volume sales jumping 15% during the year to November 2017, said Coregeo. It hoped to take advantage of this sales growth by targeting a new consumer base with the frozen option, it added.

Jackson added: “We’ve seen great success with fresh Tenderstem and knew there was a demand for this versatile vegetable to be offered to consumers frozen. We’ve taken our time developing the product, making sure that the sweet flavour and tender texture that makes Tenderstem so unique is captured perfectly when cooked from frozen.”