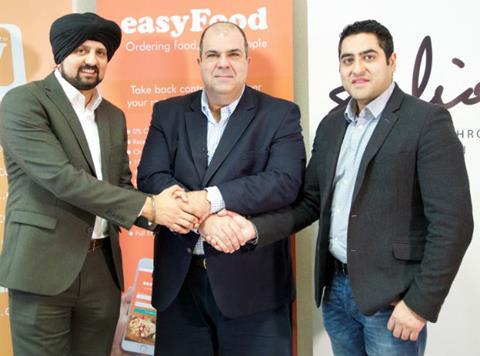 A new online takeaway ordering business part-owned by EasyJet tycoon Sir Stelios Haji-Ioannou is looking to work with grocers, according to one of the founders.

Called EasyFood, the business was created with the ambition of challenging Just Eat by providing restaurants with a way of taking online orders and charging them a subscription fee rather than commission.

The service includes an app-based ordering platform, and restaurants are given handheld terminals they can use to quickly change menus and prices at no additional cost. Clients can also be provided with their own branded website, including a payment platform.

The service was launched in Birmingham last week and already has 200 subscriber restaurants in and around the city, with ambitions for a national rollout.

Delivery itself is currently taken care of by restaurants, as with Just Eat, but EasyFood co-founder Gurpreet Sidhu said the business aimed to also provide a delivery service within six months. It had already spoken to potential grocery partners, he said.

“We are looking at providing a value-led service for both receiving orders and delivering orders as well.”

On grocery, he added: “It’s interesting because we’ve had someone approach us already. We’re looking at the local corner shops, independent grocery stores. People would love to be able to pre-order and go and collect but we’d even have a local delivery.

“So, it’s something that we’re talking about. It would make a lot of sense and we’ve made the solution.”

EasyFood claims to offer takeaways savings of hundreds of pounds a month, with subscription packages starting at £100, compared with market leader Just Eat’s 14% commission charges. In 2010, the average takeaway owner was paying £725 a month to web platforms, the company said.

Sidhu and business partner Jeewan Sagu were initially sent a “cease and desist” letter by Sir Stelios’s lawyers over their business name but the billionaire EasyJet founder was later convinced to buy a one-third stake in the company. “We always felt that online was the future for the takeaway market,” said Sidhu. “But we were shocked to see how much of that value has been captured by venture capital-backed web apps, which have eaten into takeaway owners’ margins, forcing them to work harder and harder for less return.”

“Restaurant owners are in pain - they are really under the thumb of the web platforms who have been abusing their power,” said Sagu. “They claim to be ‘reinvesting’ commission charges in marketing but they are only promoting their own brand at the expense of the individual restaurants and their direct contact with regular customers.”