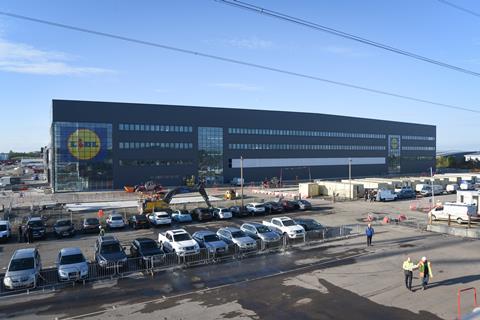 Lidl has accepted it needs to do more to improve human rights in its supply chain after coming lowest in Oxfam’s supermarket rankings.

The discounter told The Grocer it would carry out human rights impact assessments in the year ahead to better understand conditions in its supply chain.

Lidl came bottom in Oxfam’s ranking of six of the UK’s biggest supermarkets last week, and faced criticism from the charity for scoring 0% on tackling discrimination against women.

A spokesman for the discounter said Oxfam’s scorecard did not accurately reflect improvements made in the past year, including Lidl’s publication of its human rights policy. But he acknowledged more work was needed.

“At Lidl, we operate with a fundamental respect for the rights of the people we interact with, whether they be our own direct employees, contract workers or people employed throughout our supply chains, and are firmly opposed to all forms of labour exploitation,” he said.

“We are committed to driving improvements in labour standards across our supply chain and improving transparency around working conditions. In the past year we have taken some significant steps and made strong commitments, including the publication of our human rights policy and disclosure of our governance structure to ensure full accountability. We are also proud to have been one of the first retailers to make public a list of our 650 main suppliers’ production facilities for textiles, footwear and priority food products.

“Whilst we do not believe the scorecard represents an accurate reflection of the progress that’s being made by Lidl GB, we recognise there’s more we need to do on this. This is why we have committed to undertaking human rights impact assessments over the coming year, to better understand the issues faced by workers in the far reaches of our supply chain. We have been and remain committed to working collaboratively with Oxfam, the wider industry and expert partners to drive further improvements throughout our supply chains, both in the UK and internationally.” 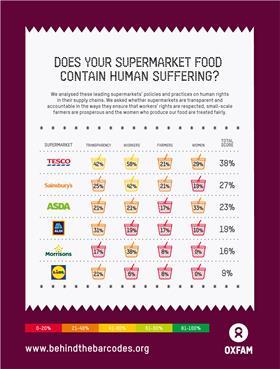 Oxfam’s Behind the Barcodes campaign gives the six supermarkets scores for four criteria, including transparency, worker conditions and treatment of small-scale farmers, as well as tackling discrimination against women. Each also gets an overall score.

The scores are based on “publicly disclosed policies and practices” measured against “internationally recognised indicators of good practice”, according to the charity.

Lidl had dropped two positions compared with last year, swapping places with Aldi, which rose from sixth to fourth. Lidl’s overall score was up, from 5% last year to 9%, but it came last thanks to across-the-board improvement from the other supermarkets.

Commenting on the results last week, Oxfam ethical trade manager Rachel Wilshaw said: “Supermarkets have the power to be a force for good in ending suffering and abuse so it’s encouraging that all six UK supermarkets have made improvements over the last year. But it is clear they are still falling a long way short of what needs to be done to ensure that the people who produce our food are properly rewarded and protected.

“It is especially concerning that Morrisons and Lidl continue to receive no score for ensuring that women workers are treated fairly and equally. More targeted measures are needed to tackle exploitation of women workers as this remains a major weakness across all of the supermarket supply chains.”

A Morrisons spokeswoman said: “We recognise the responsibility that we share with our suppliers to buy, produce and sell our products in an ethical manner and do not tolerate the exploitation, unfair or unequal treatment of any workers in our business or supply chains.

“Morrisons has made significant progress in a number of key areas since the publication of Oxfam’s 2018 supermarket scorecard.”